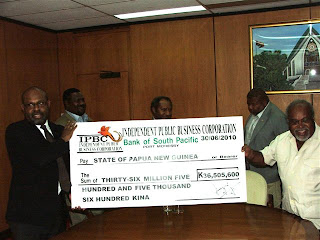 Minister Sir Michael Somare, appearing in public for the first time yesterday since reports of an impending vote of no-confidence motion by the opposition following a Supreme Court ruling nullifying sections of the integrity law, was on hand to receive a mock cheque for K36 million in dividend from Public Enterprises Minister Arthur Somare on behalf of the Independent Public Business Corporation. Sir Michael also challenged opposition leaders Sir Mekere Morauta and Bart Philemon to meet him at the polls in 2012, not via a no-confidence motion. -Nationalpic by JEFFREY ELAPA

Prime Minister to opposition: Take me on at polls

Appearing for the first time in a media engagement to receive a cheque for K36 million in dividend from Independent Public Business Corporation, Sir Michael issued the challenge to opposition leader Sir Mekere Morauta and his deputy Bart Philemon to take him on at the polls in 2012, and not through a vote of no-confidence.

The prime minister refused to take questions and did not elaborate, but it opened doors to speculations the PM may run again in 2012 and not quit politics.

Sir Michael said a lot of the allegations raised by the opposition in the last few days border on defamation.

Angoram MP Arthur Somare, who is Minister for Public Enterprises responsible for IPBC, was on hand to hand over the cheque.

Somare said there was nothing much to discuss on the current speculations and numbers game.

He said the National Alliance was intact and the prime minister had a job to do for the country and not bogged down by political speculations.

He said the NA was intact and was concentrating on doing the job in delivering to respective districts and the country.

Wabag MP and Foreign Minister Sam Abal said stability was crucial to lift social indicators and the prime minister was mandated to lead the country until 2012.

PAP leader and Minister for Commerce and Industry Gabriel Kapris stated that there was no need for a change as the government had been doing very well.

“I do not see any reason why people wanted change as this government has brought major projects including the LNG and Madang marine park development,” Kapris said.

United Party leader and Defence Minister Bob Dadae, in a separate statement, confirmed that his party supported the NA-led government and would not vote against Sir Michael in any vote of no-confidence.

The United Party has Northern Governor Suckling Tamanabae as its second MP in Parliament.

An opposition spokesman contacted last night said they were firming agreements with various factions in government despite what the leaders were saying.

“Whichever way you look at it, the government will change,” the spokesman said.