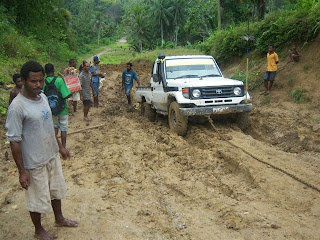 Rural communities such as Ossima in the province lack good roads as shown in this photo. Villagers have a hard time transporting their produce to markets due to poor state of road conditions.

Farmers in the province, especially women and youth, need more government assistance to cope with the demand for food expected from the multi-million kina LNG project.

A women’s leader made the call at the Consultative Implementation and Monitoring Council forum in Goroka last week.

The biggest need was seed capital for the women and youths to be fully engaged in farming projects and activities.

Huku said road and market infrastructure needed to be upgraded to enable the farmers to transport their produce to the market and the mining companies.

Accessibility to good road network is also important for farmers to also enable them to receive basic services such as health, education, law and order and others.

Huku said the CIMC forum theme was on rural infrastructure and communication, the vital links in the development chain, however, she was disappointed that representatives from some key agencies and organisations in the region did not attend, apart from the provincial administrator.

It was an eye-opener for women leaders like her and she urged the government to take note of the forum recommendations.

Huku said agricultural services in and newly-created Hela provinces were deteriorating and urged relevant agencies and stakeholders including mining companies to improve services to farmers at the community and village level.

She was concerned that many men were being lured by the LNG project thus leaving only the women and young people to participate in agriculture.

“The people depend on farming for their livelihood.

“It is very important for the provincial administration, agricultural agencies, mining companies and other stakeholders to work together in promoting agriculture in the province.”

The LNG project will have a major impact on the agriculture sector and it is important that agriculture delivery services reach the women who can be supported to produce more food to meet the expected huge demand.

It is also necessary for the relevant authorities to introduce new types of food crops to cater for different tastes.

She said farmers in the highlands region needed support to boost agricultural farming to meet the demand from the LNG project.

She believed that farmers in the region have the capability to produce food for LNG but they needed government assistance.

“Farmers in the province are growing food crops on a bigger scale but one of the main problems they face is lack of cool room storage facilities besides inadequate transportation infrastructure.”