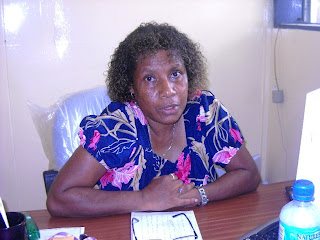 Lae-based civil engineer Finkewe Zurenuoc has expressed concern at the unplanned and haphazard construction of concrete roads in Lae.

She expressed her concern when supporting comments made by regional works manager Brian Alois in The National last Friday about road construction in Lae.

“I had the opportunity to see some of these road constructions on my morning and afternoon walks and noted that there was a difference in the sizes of the re-enforcing bars used by the different contractors,” Zurenuoc said.

“I, at that time, questioned if there had been a design check by the consultants to standardise all the design - I suppose not?

“As a driver, one feels the vast difference in driving comfort on the different concrete roads - the one coming up the hill from the stadium is the worst one.

“Has there been any work done on traffic restrictions on the roads and have these new or maintained roads been designed and conform to the traffic loadings?

“In general, there is a lot left to be desired with these maintained roads.

“There is a lot more that could have been done in the design and construction of the road to ensure a good final product, and to safety and comfort for road users and for residents and the general public.

“I live next to a newly-cemented road.

“When the road was partially opened for use about two weeks ago, we had three accidents within a week.

“In all cases drivers went straight off the road into the newly-constructed drains.

“Maybe barricades could have been installed in places.”

Zurenuoc also pointed out that there were no street lights.

“We are also driving around in the dark,” she said.

“There is no street light.

“Why weren't street lights and other road furnishing included on this road construction?

“The roads are incomplete without the furnishings.”

Zurenuoc said the current roads works and other supposedly “completed” roads left a lot to be desired.

“There are two crossings on that portion of the road that are not clearly marked nor are they adequately illuminated in the night,” Zurenuoc said.

“One crossing is right on the Food Mart cargo-entry driveway.

“For one, the crossing markings on the road are not visible during the day

“During the night there is insufficient lighting over the crossing.

“We are going to have a major accident.

“There is inadequate street lighting on that road.

“With regard to the above road, isn't the integrity of the seal and the concrete on either sides of the Huon Road being comprised by the current unmaintained state of the 7th Street roundabout?

“We at Institute of Engineers of PNG asked the question of proper storm water drainage.

“I haven't seen one put in yet nor have I seen the new drains being linked up with any existing drainage system to adequately take the water away from the roads.

“With all these rain coming down, I am expecting the newly-constructed drains outside my house to get clogged up again.”