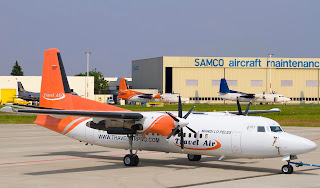 A Kokopo-based businessman, who obtained K10 million under the development budget to set up an airline, said yesterday the money was a government budgeted subsidy and not a bogus claim, The National reports.

Eremas Wartoto, a successful Papua New Guinean businessman who has invested more than K100 million in the airline industry, and has bought five Fokker 50 aeroplanes, has several other business interests including travel services, hire cars, construction and hotel and shipping industries locally and abroad.

He said since venturing into the airline industry, he needed infrastructure to be in place and applied for a government grant as a citizen to get the buildings and "other necessary things" in place before the planes were flown into the country to begin operations.

He said the government had helped his company, Travel Air, with K10 million "which was just 10% of the K100 million investment over the next five years".

Wartoto said the government was shown the investment plan and approved the subsidy through the public-private partnership programme to help with setting up infrastructure to start operating his five Fokker 50 aeroplanes.

"I submitted the application on behalf of the company last year and went through the normal government screening procedures," he said.

"There was nothing sinister about the payment.

"It was not a bogus claim as reported. It is a significant development that the government saw fit to support and I am grateful for the help.

"We appreciate the government's vision to at least subsidise 10% of that investment.

"This investment will be based in Madang, replacing the Airlink ser­vice which was servicing much-needed air routes that are not currently serviced on a daily basis," Wartoto said.

He said his airline would open up air routes that had not been served by other airlines. These routes included Aitape, Kandrian and Aropa.

He said two of his planes were sitting in Maastricht, in the Netherlands, awaiting Casa PNG clearance at the end of this month for delivery early next month.

Wartoto said three other aircraft in Malaysia were being prepared to be delivered around the same time.

He said he had signed up on two additional aircraft in Maastricht that would be ready for delivery in October.

Managing director David Pondoros, who was also named in the newspaper report, said his company was engaged to do two important national projects; the Abaca study and the diesel-free rural electrification programme.

He said the first payment of K500,000 was for the Abaca project, an important project that would be­-nefit the country while the other

K3.6 million was for the air compressor generator "to light up rural communities".

"Lawyer Philemon Korowi failed to do a proper research and had compiled a report based on the payment print to destroy my name and that of my company when everything, including the acquittals, was in place."