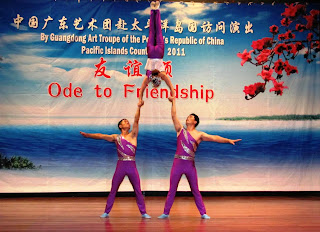 Caption: Acrobats from the Guangdong Art Troupe performing an eye-opening routine on the night at the University of Goroka.-Picture by KATE GUNN

By KATE GUNN of University of Goroka

On the evening of Sunday, July 24, a troupe of 32 performing artists from the Guangdong province of the People’s Republic of China delighted audiences at the University of Goroka for the first time ever.

A dazzling performance for UOG was held at the Mark Solon Auditorium to a full capacity crowd, which was amazed at the levels of talent, physical strength, agility and professionalism displayed by all performers on the night.

All acts were very entertaining with special attention given to costumes, lighting, and music to form a show that was extremely well executed and enjoyable to watch.

The performance was given by the Guangdong Art Troupe as part of their Ode to Friendship Tour of Pacific Island countries including Fiji, the Federated States of Micronesia, New Zealand, Papua New Guinea, Samoa, Tonga and Vanuatu.

The performance was initially meant to be a one-night only show for Port Moresby residents, however,  due to the positive relationship formed with Guangdong Foreign Construction Company, Guangdong Constructions PNG and the University of Goroka, the Guangdong Art Troupe made a special trip to Goroka to perform for staff, students and friends of the UOG.