Papua New Guinea has published the results of its first comprehensive survey on key populations in the country. 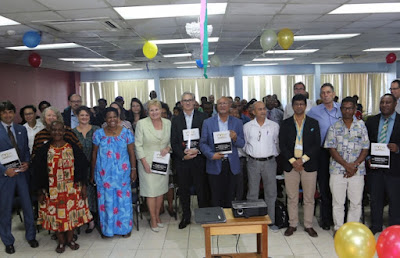 The report is the conclusion of a study that collected estimates of the sizes of key population and biobehavioural data, which will be used to inform prevention and treatment services and policies for HIV and other sexually transmitted infections.

“Only when we ensure that Papua New Guinea’s HIV programming reaches the right people in the right way and place, and at the right time, will the increasing HIV infection rates amongst key populations be slowed,” said David Bridger, the UNAIDS Country Director for Papua New Guinea, at the report’s launch.

The study, Kauntim mi Tu (count us), was carried out in the three largest urban areas of the country—Port Moresby, Lae and Mount Hagen.

It revealed that female sex workers, gay men and other men who have sex with men and transgender people often do not seek health care, get tested for HIV or other sexually transmitted infections or use condoms.

Members of key populations in the country face real and perceived stigma, discrimination and violence from police, clients and others in their communities on a daily basis, according to the report.

High rates of stigma, discrimination and violence are deterring them from seeking or accessing health-care services.

A member of Friends Frangipani, an organization of sex workers, said, “Many of us live very difficult lives. We don’t all have access to clean water, healthy food or a safe space.

"Yet we are told to look after ourselves, protect ourselves from HIV and, if HIV-positive, stay healthy.

"That is very hard for many of us.

"People need to understand our lives better, and Kauntim mi Tu has done that.”

While adult female HIV prevalence is estimated at 1.1% nationally, the study found that prevalence was nearly 20% among female sex workers in Mount Hagen and almost 15% in the capital, Port Moresby.

More than half of gay men and other men who have sex with men and transgender people were found to have never been tested for HIV.

Three out of four men in the second largest city, Lae, reported having experienced violence related to their sexuality or sexual identity.

The study included biological testing, with participants offered point-of-care tests and, if needed, same-day treatment for syphilis, chlamydia and gonorrhoea.

The study’s principle investigator, Angela Kelly-Hanku, noted that much work remains to be done.

“This work must be done in the context of safe, respectful and enabling environments that support adequate public health responses and invest in new and dynamic ways to increase HIV testing and ensure that treatment is continuously available, that viral load testing is standard HIV care and that prevention is paramount to everything.

"We cannot be complacent,” she said.

The report is available at http://www.aidsdatahub.org/sites/default/files/publication/PNG_Kauntim_mi_tu_Multi-Site_Summary_Report_from_the_Key_Population_IBBS_2018.pdf
Posted by Malum Nalu at 5/24/2018 10:30:00 AM