From Balimo to Port Moresby 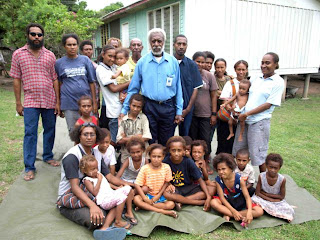 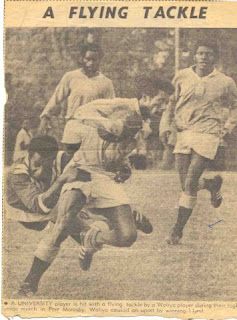 The opening lyrics of that great song by Bruce Springsteen, Glory Days, came immediately to my mind as I sat down and enjoyed a beer with long-serving Telikom employee and former PNG Pukpuks rugby union legend Badi Seyawa at the Paddys Bar.

I had a friend was a big baseball player

back in high school

He could throw that speedball by you

Saw him the other night at this roadside bar

We went back inside sat down had a few drinks

but all he kept talking about was

Glory days, in the wink of a young girl's eye

Seyawa, 59, from Saweda village in Balimo, Western province, leaves Telikom next month after a distinguished 42 years of service to the organisation – from an age of telegraphs to the internet, from the glorious colonial era to what is now a ramshackle .

But for all that he has done for the organistion, Seyawa has not been duly recognised,

something that he is somewhat bitter about.

And apart from his career, he also excelled on the rugby union paddock in the halcyon days of the 1970’s and 80’s, as a feared centre for the much-vaunted Waliya team from the Western province, against men like Mekere Morauta, Anthony Siaguru and Arnold Amet,

Those memories of another day, including the loss of his beloved wife Renagi last August, came back as we downed our beers.

“Waliya was ‘the’ team then,” Seyawa reminisces.

“Waliya was the team to beat.

“I was captain/coach and I did some magic things for Waliya.

In his photo album is a newspaper cutting of him making a flying tackle on University’s Arnold Amet, team manager of the 1979 SP Games, and who was fated to one day become Chief Justice of PNG and Governor of Madang.

“Last year’s had their colours lowered for the first time in 14 months when they met Waliya in the pre-season rugby union competition on Saturday,” wrote Boyd.

“The men who made the game for Waliya were Badi Seyawa and Kapiya Mase.”

The Balimo warrior has come a long way since he started school at the Evangelical Field Mission in 1955.

“I completed grade 4 there and then I was selected to government school at ,” he recalls.

“From Grade 5, I was selected for Grade 6 with my brother.

“I spent three years there and graduated in 1965, with Sir Mekere Morauta being my senior at that time.

“I was selected to come to Sogeri Senior High in 1966.

“I grew up with a Christian family and I wouldn’t have achieved all this without a Christian upbringing.

“I must thank them (family) and thank God for bringing me up to what I am today.”

Seyawa started off very humbly in those far-off days.

“I started off as a clerical assistant,” he tells me.

“I started off at the post office in downtown .

“That’s where the P & T head office was.

“My job was to bill the customers who were using our system.

“P& T was under the Australian government.

“In 1970 and ’71, I was selected to go down to for the Commonwealth practical scheme.

“There were two of us from P & T selected to do this training for six months in .

“I was attached to the Post Master General’s billing office in .

“After I came back, I was given the responsibility of looking after telephone accounts.

“I was in that job for about two years.

“After the two years, I was given another position as administrative officer, which was basically recruitment, training, and everything human resource.

“Organisational changes saw me promoted to divisional administrative officer of finance, the position which I’ve been holding for 37 years now.”

The technological changes which have taken place over the last 42 years, including the growth of and PNG, have been phenomenal for Seyawa.

“Technologically, there have been very big changes over the years,” he says.

“Whatever has taken place from when I started up to now is hard to describe.

“My life within the Telikom organisation has been like a family, which I grew up in.

“The changes have been remarkable.

“My simple advice to our young people is to be committed, dedicated, honest and respect your superiors.

“That’s what I did and all my friends have all the respect for me.

“These four things made me what I am today.”

Badi Seyawa officially finishes from Telikom on March 14, 2009, exactly 42 years after he started with the then P & T.

The loss of Renagi, from Gagagaba village outside , his beloved partner of many years last August, brings tears to his eyes as he brushes his white beard.

“I’ve got a lot of plans for my kids,” Seyawa says.

“Coming from Balimo to is a long way.”