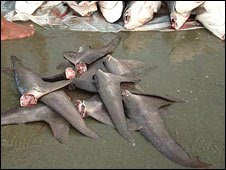 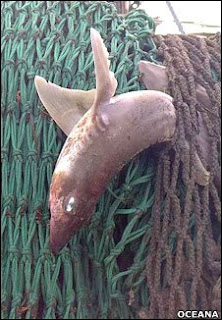 Captions: 1. Top cuts on the quay. 2. About 50 million sharks a year are caught accidentally

The European Commission has unveiled measures aimed at protecting sharks, many of which are in sharp decline.

The proposals would close loopholes in current shark finning regulations, cut catches of endangered species and set quotas according to scientific advice.

About half of ocean-going shark species are threatened with extinction.

Conservation groups have given a mixed reaction to the commission's proposals, which now go to the European Parliament and Council of Ministers for approval.

"The plan is a great step forwards for the conservation of sharks in European waters and beyond," said Sonja Fordham, policy director of the Shark Alliance, a coalition of organisations representing conservation, science and recreational interests.

"The commitments to science-based fishing limits, endangered species protection, and a stronger finning ban are essential to securing a brighter future for some of 's most vulnerable and neglected animals."

The regulations will also apply to sharks' close relatives, skates and rays.

But the Madrid-based conservation group Oceana said the proposals did not go far enough.

"We have got a vague document which does not contain measures to achieve the goal of conservation and sustainable management of sharks," said the group's director of investigations, Ricardo Aguilar.

"Key omissions include a commitment to the precautionary approach, and integration with existing EU and global environmental measures that aim to protect threatened sharks and their habitats."

Among other things, Oceana had been lobbying for a much tighter timescale on the introduction of these controls, some of which may not come into force for four years - and then only if the European Parliament and Council of Ministers agree.

The most concrete of the commission's proposals concerns the regulations on finning.

European vessels are not allowed to remove fins from sharks and dump the carcasses in the water - a practice that used to be rife as fishermen sought to supply fins to the lucrative East Asian market with the minimum bother.

Instead they have to land detached fins and carcasses in a ratio of weights that is supposed to ensure that everything makes it to port - one carcass for every fin.

Activists have long held that the use of relative weights is a loophole that fishermen can and do manipulate, allowing them to discard up to half of the carcasses.

They have urged the EU to mandate that all sharks must be landed with fins still attached, as the does for many of its shark fisheries.

The commission has now accepted this argument, and is proposing that "fins attached" becomes standard across EU fleets, although there might be exceptions.

Other elements of the proposals include:

Bycatch is a particularly thorny issue. Sharks regularly become impaled on hooks dragged by boats targeting high-value species such as tuna, or entangled in nets.

The commission envisages developing types of fishing gear that allow fishermen to target more specifically what they want to catch.

In recent years, it has become clear that sharks, rays and skates are inherently vulnerable to overfishing because they reproduce slowly and live long lives - a factor that EU Fisheries Commissioner Joe Borg recognised as he unveiled the new proposals.

"Sharks are very vulnerable to overexploitation, and the consequences of depleting their numbers may have very serious consequences not only for sharks but also for marine ecosystems and for fishermen themselves," he said.

"That is why we have set out a plan of action today which will both establish a more precautionary approach to managing fisheries where sharks are caught, and support the substantial research still needed to understand fully the role sharks play in the life of our oceans and the impact which fishing may have on them."