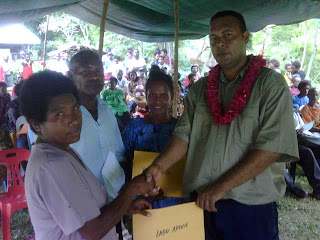 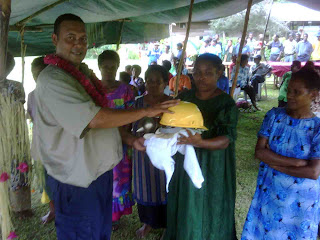 Bulolo MP Sam Basil presents beekeeping gear and tools to a graduand last Friday
Bulolo MP Sam Basil has urged beekeepers in his electorate to tap into lucrative honey, which is now fetching up to K10 a kilogram.
He made the call as Bulolo’s first lot of 30 women beekeepers graduated at Baiune High School last Friday (April 24), with training facilitated by the Eastern Highland provincial government’s division of agriculture.
Five women from each of the six local level governments (LLGs) – Mumeng, Buang, Watut, Wau Urban, Wau Rural and Waria - received their certificates last Friday.
Waria, the most-remote LLG with no road links, has untouched and diversified flora and fauna to complement the bee programme.
The beekeeping project was made available by Mr Basil through the K200, 000 national agriculture development programme (NADP) funds last December.
The programme was slightly delayed when the bank dishonoured the first deposit, but then redeposited in March.
Mr Basil praised the Eastern Highlands government for allowing its honey bee project team to come to Morobe and impart its knowledge to the 30 women.
“If the Eastern Highlands provincial government hadn't kept the bee programme alive, then my district would have spent more to import the know-how plus the equipment from overseas,” he said.
“The National Agriculture Department must do more about promoting small scale agricultural programmes as such, and encouraging the women in agriculture concept through these backyard programmes.
“Beekeeping should be found at almost everybody's backyard due to the floral diversity of PNG.
“A kilogram of honey nowadays can fetch about K10, and with about 10 bee hives, a farmer can make more then K3, 000 per annum.”
Mr Basil said he had to travel up to Goroka himself to arrange for the bee hives and urged the national agriculture department to allocate funding direct to bee trainers and direct them to provide at least 100 bee hives, plus training and tools, per LLG in the country.
“We, the district, should then arrange for the logistical part,” he said.
“The same concept can be applied to inland fish farming and fingerling supplies, goats, cattles, water buffalo, ducks, rabbits and the list goes on.
“Primary industry in PNG has been suffering for so many years, despite millions and millions of kina being spent over the years.
“Last year, under the NADP programme, many more millions of kina have been injected, however, the hope of achieving our agricultural goals is still a long way to be realised.”
Posted by Malum Nalu at 4/27/2009 06:00:00 AM