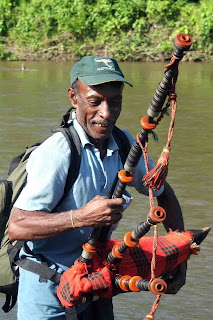 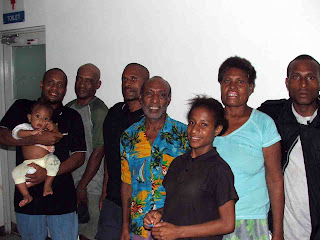 Jack Osi and family a few weeks before his death

By AARON HAYES
Jack Osi was a familiar face in the Defence Force over the past thirty years.
He was one of the bagpipe players in the Royal Pacific Islands Regiment pipe band and he was often right in the front row of marchers at parades, ceremonies and other special occasions.
He travelled the country performing for dignitaries and the general public alike.
Even after his retirement he was recalled many times to play and march in parades because the new generation of the Defence Force now has only a handful of bagpipe players left.Last year he gave his last two public performances.
One was in front of a camera for a film crew from Ireland shooting a travel show called No Frontiers.
They were doing a jungle trek up the Lakekamu River near Jack's home and when they heard that there was a bagpipe player nearby they insisted on getting him to play for them.
Ireland and Scotland are the two countries where bagpipes originated so the Irish film crew was astonished to hear their national instrument played so expertly out in the middle of the PNG jungle.
Well-known Irish TV personality Kathryn Thomas appeared with Jack in the segment.
The film crew's visit was coordinated by local tour company Ecotourism Melanesia and they also visited Simbai and Mt Wilhelm.
If you have broadband internet access you can watch footage of the show at this internet link: http://www.rte.ie/travel/nofrontiers/20080323_papuanewguinea.html (rte.ie/travel/nofrontiers/20080323_papuanewguinea.html)Jack Osi's final gig was the Independence Day celebrations in Western Province in September last year.
He and some other retired army bandsmen were flown out to Balimo and Kiunga on a charter flight to play at the Independence ceremonies.
Balimo seems like just as strange a place to hear bagpipes as the Lakekamu River.
Sadly, Jack Osi passed away on Easter Saturday night, and his bagpipes now sit quietly in their case, never to be blown by Jack's lips again.
* * * * *
Jack was a fit and healthy 55-year-old but started to experience paralysis on one side of his body just before Christmas.
A CT-scan showed that he had some kind of tumour growing on his brain.
Maybe tuberculoma. Maybe cancer.
Doctors put him in the hospital and said to try treatment for TB first and if that doesn't work, assume it's cancer and try to surgically remove it.
He was in hospital for many weeks but during the nurses strike earlier this year the wards were understaffed and he was discharged.
When the strike was over it took four weeks to get him re-admitted because there weren't any beds.
By this time he was almost completely paralysed and another CT-scan showed the tumour was getting bigger.
Probably cancer because it wasn't responding to TB drugs.
Poor old Jack found it difficult to eat the solid food provided by his family and lost weight rapidly but for some reason the hospital did not put him on a drip.
They don't even seem to have bleach to mop the floors these days so it wouldn't be surprising if they didn't have an IV drip for an old soldier either.
Doctors said to operate but dithered and delayed and then it was too late - he was gone.
Weak from lack of nutrition, he just ran out of life energy well before the tumour could deliver its fatal coup.
But even after death the health system dealt poor old Jack a final body blow.
When he died at midnight, the morgue was closed and the family was told to take his body home for the night and bring him back at 8am in the morning.
His grieving widow and four proud sons had to wheel his still-warm corpse down to the carpark, manhandle him into a sitting position in the back seat of the car and drive him to the house for overnight.
By morning when it was time to drive him back to the hospital, rigor mortis had already set in and the four sons, by now distressed and traumatised by the ordeal, struggled to get the stiffening corpse into the car.
What a humiliating experience for the family of this proud soldier, to have to unload his corpse from the back seat of a car and carry him into the morgue.
But how is Jack Osi's experience any different from any other public health care patient in the city?
The wards are overflowing and waiting lists for beds are very long.
The corridors, toilets and other public areas of the hospital are filthy.
Even in the wards, flywires are ripped and clogged with dirt and many overhead fans, lights, taps and toilets don't work.
The morgue seems to be always full, or closed, or both.
Different doctors do ward rounds each day and patient care seems inconsistent.
One doctor says one thing, another doctor says something else, if you're lucky to get any information at all.
Most of the time doctors are rushing and don't stop to explain properly about the patient's diagnosis, treatment and prognosis.
Nurses too never seem to have time to stop and explain what's going on.
Probably shortage of staff, equipment and supplies is the reason for all these problems, and maybe it all boils down to not enough money or not enough prudent use of money.
All Jack Osi's family know is that their father served his country with distinction but when it was time for the national health system to look after the old soldier, it failed miserably.
Donations for Jack Osi's widow Mrs Haro Osi can be deposited to Ecotourism Melanesia Ltd Tour Trust Account ANZ 12024994.
Posted by Malum Nalu at 4/26/2009 12:15:00 PM