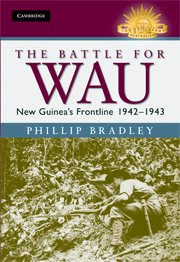 There are a number of battlefields that continue to remind us of the sacrifices and struggles that took place throughout the Pacific during World War II.
We often think of Guadalcanal, Coral Sea, Midway and Kokoda as sacred spaces where lives were lost and victories secured.
Phillip Bradley’s new book, The Battle for Wau: New Guinean’s Frontline, 1942-1943 (Cambridge University Press, 2008), reminds us of another important conflict in the Allied effort.
Having failed to take Port Moresby in the Battle of the Coral Sea and along the Kokoda Trail, Japanese forces were sent from Rabaul to Salamaua and Lae.
Wau became the barrier for a final push across New Guinea and initially only a small force stood in the way.
However, ANZAC forces combined with American airpower to ensure that this did not happen; that Wau did not fall.
Bradley’s book is a well-researched account of this decisive battle and the efforts of Kanga Force, an independent company combining New Guinea Volunteer Rifles and parts of the Australian 1st and 2/5th Independent Companies.
While many women and children were evacuated as Japanese forces advanced onto New Guinea, Kanga Force was mobilised to ensure that Wau and its significant airstrip remained in Allied hands.
Bradley’s account begins in 1942 with the Japanese invasion of Lae and Salamaua, and then follows Kanga Force’s formation and subsequent raids on Japanese positions along the coast.
He then takes us through a detailed account of battles and skirmishes as the Japanese moved toward the Bulolo Valley along old mining trails, before recounting the final battle and the stunning air transport of the 17th Infantry Brigade into Wau.
On 29 January 1943, as Japanese pressed toward the airfield, fifty-nine flights made it into Wau carrying 814 reinforcements and additional supplies.
Under fire as they made their daring landings on what remains a unique airstrip, it was this strategic move that proved decisive.
Wau was protected and a significantly reduced Japanese force retreated toward Mubo and Salamaua.
As the book combines carefully examined archival research with interviews and private letters held by the families of those who fought, the strength of the text rests on the fleshing out of the men who were willing to sacrifice their lives on the kunai fields and in the dense forests between Salamaua and Wau.
Their heroic and self-sacrificing efforts are well served by this text as Bradley fills in the detailed description of each battle with the personalities that fought them.
While the author does include numerous Australian, American and Japanese sources, what is really lacking are detailed accounts of Wau’s local populations, as well as the many laborers from all over the island.
They carried supplies and fought alongside the ANZAC forces Bradley tells us.
And he is not insensitive to the role that people from throughout New Guinea played in the conflict, having spent time trekking along the Black Cat trail and Skin Diwai, exploring the locations of the conflict with local guides to get a sense of the places.  While he rightfully credits the victory to the troops, he acknowledges that the “ability of the ANGAU personnel to gain the trust and devotion of significant numbers of local carriers was a significant factor in this campaign and those that followed” (pg 240).
I know from the accounts and stories of Biangai and Watut who live in Wau today that the local reaction to the fighting varied.
Some did flee, some helped where they could, and others served as carriers, but a significant group also fought alongside Kanga Force.
It’s an important part of history that Bradley can only hint at, and waits for Papua New Guinean historians to explore.