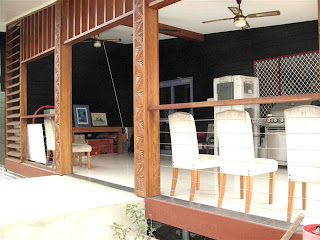 Many large blocks in Boroko, Port Moresby, which contained single houses built in the colonial era have since been developed with blocks of apartments.
Other blocks have a refurbished version of the early single storey homes.
However, there is one house (pictured above) still under construction that has something rather special and is very different.
The owner is Australian and the wife is Sepik.
This combination has produced a house that has all the most-modern facilities but with traditional Sepik features incorporated into the construction of the house.
The main house is now two-storey and 309 square metres in area with four bedrooms, study and family room plus a very-spacious lounge and dining area.
The principal feature is every woman’s dream kitchen in three long granite bench tops imported from Australia with rosewood cabinetwork and a servery opening directly to the 2.5 metre entertainment pool deck running the full length of the house.
The wide staircase and carved balustrade are also in rosewood.
The rosewood entry columns all have Sepik carvings; the cheesewood pressure termite treated weatherboards are in three specially-profiled wide sizes finished with a charcoal stain and clear Cabot’s oil finish and with maroon powder coated aluminium windows. The internal house colours are all ‘earthy’ but include some strong colour feature walls. The dining table has a long chandelier suspended from the high ceiling which really sets off the formal dining area.
Flooring is a combination of Kwila timber externally and large tiled floors internally with smaller tiles to wet areas.
The main shower has a large polished brass shower outlet designed in the opulent years of the past.
The 17 x 2.4 metre lap pool has blue tiles to represent the Sepik River and the attached spa has a mosaic-tiled pukpuk lazing in the sun on the river bank.
The terra cotta tiles used for the pool coping have a heavy bullnose to prevent debris entering the pool.
There is a separate entertainment building complete with BBQ zone, kitchenette, pool table, plasma TV, bathroom and a glass wall which opens out to the pool side.
The house has been designed by K G Contractors Ltd (KGC) in conjunction with their client, Architect Consult Services and Vincent Hicks Structural Engineer.
All on site construction works has been performed by KGC leading their subcontract team of Abcott Joinery (cabinetwork), Niugini Plumbing Services, MTG Electrical, South Pacific Airconditioning and J D Hayes (metalwork).
Material suppliers included Cloudy Bay Sustainable Forestry (timber), Niugini Glass & Aluminium (windows), L & A Tile Merchants (tiles) and Taubmans (paint).
Posted by Malum Nalu at 4/27/2009 12:00:00 AM