How Susan Boyle won over the world 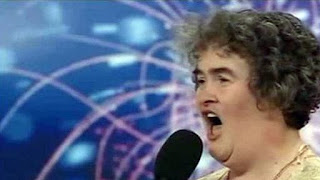 Last weekend, Susan Boyle was just a face in the crowd.

This weekend, clips of her singing on 's Got Talent have notched up almost 50 million views on YouTube.

Her face appears on the front pages of papers in and beyond, she been offered a seat on Oprah's sofa and has been told she is as good as guaranteed a worldwide number one album.

The rise of the 47-year-old spinster from has been a true global phenomenon.

Last Saturday, viewers saw Boyle, with double chin, unkempt hair, frumpy appearance and eccentric demeanour, step onto the talent show stage and proclaim her dream of being a professional singer.

The judges rolled their eyes and the audience pulled incredulous faces. Onlookers, on set and at home, were rubbing their hands at the prospect of another hopeless, deluded loser being crushed by a withering Simon Cowell insult.

Then she opened her mouth and sang I Dreamed A Dream from Les Miserables.

Her voice confounded all expectations - the judges' eyes bulged, the crowd went wild and Boyle became an instant star.

Ever since, the "fairytale" has travelled the globe and interest in the church volunteer has snowballed.

It is the story of a talent unearthed, but that does not fully explain why she has become such a sensation.

Boyle has shattered prejudices about the connection between age, appearance and talent. She has proved that you don't have to be young and glamorous to be talented, and recognised as such.

The YouTube millions have cheered on the underdog, and seen in her the possibilities for their own hopes and dreams.

Immediately after her performance, one of the judges, Amanda Holden, said they had been "very cynical", and that the performance was the "biggest wake-up call ever".

"I'm sorry because we did not give you anything like the respect we should have done when you first came out," he told her. Referring to her appearance, he said: "We thought you were going to be a bit of a joke act, to be honest with you."

Boyle would have a best-selling album and a world tour by the end of the year, whether she wins 's Got Talent or not, he assured her.

And mentioning fellow judge Simon Cowell, Morgan added: "It's fair to say that his eyes have been going ker-ching ever since Susan's performance."

Blogs, newspaper columns and talk shows have been full of discussion about why Boyle has sparked such a reaction.

She wrote: "In our pop-minded culture so slavishly obsessed with packaging - the right face, the right clothes, the right attitudes, the right Facebook posts - the unpackaged artistic power of the unstyled, un-hip, un-kissed Ms Boyle let me feel, for the duration of one blazing showstopping ballad, the meaning of human grace.

"She pierced my defences. She reordered the measure of beauty. And I had no idea until tears sprang how desperately I need that corrective."

Her post has been followed by comments from scores of readers saying they watched the clip repeatedly, with the same emotional response.

"I cried SO hard," read one. "There's something so beautiful about reaching your dreams... and knowing that age means nothing."

Another wrote: "I cry because she reminds us to hope, to never lose track of our dreams, to keep putting one foot in front of the other no matter what others say or think. She gives us hope."

"Fairytales don't come any more satisfactory than this," wrote columnist Melanie Reid in The Times.

"The sisterhood of the plain, those of us who will never look like Girls Aloud, nor even Girls Aloud's grandmothers, are cheering as never before.

"Susan Boyle is the ugly duckling who didn't need to turn into a swan; she has fulfilled the dreams of millions who, downtrodden by the cruelty of a culture that judges them on their appearance, have settled for life without looking in the mirror."

Miranda Sawyer, writing in the Daily Mirror, questioned why image was less of an issue for male singers.

"No woman gets to perform publicly unless she looks like Mariah Carey," she wrote. "If you're a female singer, you are required by showbiz law to appear sexy at all times.

"Poor Madonna and Kylie are desperately keeping up appearances, holding back the years with Botox and face-fillers just so they're allowed to continue with their careers."

The Sun newspaper has given away a free Susan Boyle souvenir poster. talk show host Jay Leno performed an impression of her on his show.

A star has been born. Whether she will she leave a dent on our prejudices about age and appearance remains to be seen.