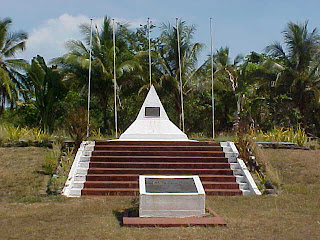 This is the third in a series of articles on WW11 icons in Papua New Guinea in the build-up to ANZAC Day next Saturday. This time we look as WW11 relics of Wewak (Wom War Memorial pictured), a place of major fighting during WW11...

Wewak, apart from being one of the best places in Papua New Guinea to holiday or live in, is also significant for its World War 11 history.
Japanese and Allied war memorials in and around Wewak, and remnant Japanese war bunkers, tunnels and wrecks are of particular interest to war veterans and their descendents and to historians.
The Wom War Memorial Park, war relics at But village, and the Japanese look out at Mission Hill (Boy's Town) are the most prominent WW11 attractions.
The lush tropical vegetation on the foothills to the south both provides a magnificent backdrop to the town.
The Australian portion of the Aitape-Wewak campaign took place in northern New Guinea between November 1944 and August 1945.
Aitape had been occupied by the Japanese in 1942.
Recaptured by an American landing on April 22, 1944, it was developed as a base area to support the continuing drive towards the Philippines.
In order to free American troops for the Philippine operations, defence of the area was passed to Australian forces.
Troops of the 3rd Base Sub Area and the 6th Division began progressively relieving the Americans from early October 1944. Although their primary role was the defence of the base facilities at Aitape, Australian commanders opted to advance to the east of Aitape, towards Wewak, to destroy the remnants of the Japanese 18th Army.
The 18th Army had sustained heavy losses as a result of Australian operations in the Salamaua hinterland, on the Huon Peninsula, and in the Finisterre Mountains.
After preliminary patrolling by the 2/6th Cavalry (Commando) Regiment, the Australian advance by the brigades of the 6th Division began in December 1944.
It had two axes - one along the coast towards the Japanese base at Wewak, and the other into the Torricelli Mountains, aimed at the area around Maprik used for the gardening and foraging upon which the Japanese force depended for its sustenance. The resulting operations were characterised by prolonged small-scale patrolling, often in particularly arduous conditions.
Assaults, when they occurred, were similarly small-scale - company attacks being the largest conducted in most instances.
Constrained by supply difficulties, progress was slow but steady.
But, on the coast was occupied on March 16, 1945, and Maprik was secured on April 23.
Wewak fell on May 10.
The remaining Japanese bastion in the area remained the Prince Alexander Mountains to the south of Wewak.
Operations there were still continuing there when the war ended in August.
Australian casualties in the campaign amounted to 442 killed and 1,141 wounded.

Over 9,000 Japanese were killed and 269 became prisoners of war. The Aitape-Wewak campaign is one of several of those fought in 1945 that has been subsequently branded an "unnecessary campaign".
While there is no doubt that the Japanese troops, bypassed and isolated, were strategically irrelevant, there was also a political imperative that Australia should be seen to be clearing the Japanese from what was, at the time, Australian territory.
Additionally, not knowing that the end of the war was just months away, Australia's military leadership was under pressure to reduce the size of the army, but also wished to have troops available for further operations towards Japan.
To realise these goals, existing operational commitments needed to be reduced, which entailed clearing Japanese from areas such as Aitape-Wewak.
Japanese Lieutenant General Adachi then kept his approximately 13,000 survivors together in the hills and surrendered only in September 1945.
Adachi himself was tried at Rabaul for war crimes, but beat the hangman by committing suicide in September 1947
In the last days of the war, Adachi surrendered near Yangoru.
He was so weak from starvation that he had to be carried on a chair.
The formal surrender took place a few days later on September 13, 1945 at Cape Wom near Wewak.
A war memorial and peace park, flanked by flag poles, is located on the spot where Adachi signed the official surrender documents for his troops, and handed his sword over to Australian Major General Robertson on September 13, 1945.
Of the 100,000 Japanese troops only 13,000 survived to surrender.
The Wewak area was the largest concentration of Japanese Army troops on mainland New Guinea.
The area near Wewak has a number of important topographical features.
The coastline is irregular, with capes jutting out from the shoreline, and the Japanese had prepared extensive defensive positions on these headlands.
It was an ideal strong hold, and was avoided by Allied ground forces until the very end of the war, and instead was neutralized by air attacks and isolated from resupply by other operations.
There are an enormous number of bits and pieces from the war scattered around Wewak.
These include unexploded bombs, and every now and then someone burning the bush sets one off.
The replacement of Wewak's water drainage project frequently turns up munitions or aerial bombs.
Mission Hill, located south of the Catholic Mission headquarters, also has a significant history.
The first Catholic missionaries settled on Mission Hill in 1912.
They, however, were forced to leave when the Japanese arrived during WW11 and occupied the hill as one of the strategic posts of the Japanese army after the fall of Wewak Point.
The area created a good defensive ground due to its high grounds facing Wewak Point and the harbour.
On May 16, 1945, Australian soldier Edward Kenna – of the 2/11 Battalion – with much bravery and sacrifice made it possible for the capture of the hill from the Japanese.
The Catholic Mission owns this area behind Wewak town.
This area was the site of one of the final Japanese strongholds assaulted before surrender in September 1945.
During the war, this area was heavily fortified and the site of heavy fighting in which a Victoria Cross was won.
Trenches, caves, old gun emplacements and tunnels are still in the area.
Since the church owned the property, relics there were not scrapped like in other part of town during the post war years.
Area is also known as "Boy's Town".
There is a Japanese War Memorial; the remains of many troops were buried here in a large mass grave.
These were later exhumed and returned to Japan.

But Airfield - But has remains of Toyota trucks, Nissan rollers and Kato artillery tractors. Once, a cache of experimental 40mm caseless ammunition was discovered for the Nakajima Ki 44 Shoki fighter.

Cape Wom Memorial Park - War memorial and peace park. The memorial is flanked by flagpoles, and is located on the spot where Japanese Lieutenant General Adachi signed the official surrender documents for his troops, and handed his sword over to Australian Major General Robertson on September 13, 1945. There are also a number of artefacts in the park - several Japanese Type 88 (1928) 75 mm anti-aircraft guns, and smaller field guns.

Kairiru Island - Japanese Naval forces occupied this island until the end of the war. There are two large naval guns on the northeast end of the island. Also, several caves used by the Japanese.

Muschu Island - This flat island was used by Japanese Naval forces, who occupied it until the end of the war. After surrender, this island was used to detain Japanese POW from all over New Guinea, until they were repatriated back to Japan. Today, it is a beautiful and peaceful tropical island.
Posted by Malum Nalu at 4/20/2009 12:00:00 AM