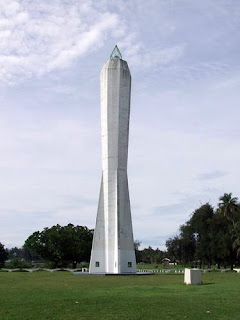 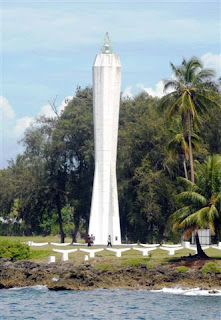 THE Madang landmark and icon– the Coastwatchers’ Memorial Lighthouse at Kalibobo Point – will be 50 years next Saturday, Aug 15.
The lighthouse was built in 1958 and completed in 1959 to recognise the invaluable contribution of the coast watchers who were spread all along the coastline and islands of Papua New Guinea during World War 11.
Armed with only tele-radios, the coast watchers took great risks to keep a look out for the Japanese forces, and reported them to the Allies, who then attacked the invaders.
Karkar planter and former parliamentarian Sir John Middleton said yesterday the coast watchers had a great impact on the war effort and deserved to be remembered.
The group was founded by an Australian naval officer named Eric Feldt, who later wrote a book about the role of the coast watchers during the war.
Apart from their many achievements in Papua New Guinea, it was the coast watchers who alerted American forces in the Solomons about a build-up of Japanese forces preparing for an attack on the Solomon Islands.
It is not known if authorities in Madang have organised any ceremony to commemorate the anniversary.
Prominent Madang resident Sir Peter Barter said the anniversary was a significant event for Madang and it would be regrettable if it was not commemorated.
ANZAC Day and Remembrance Day commemoration celebrations are now held at the light house memorial and Sir Peter said both events have attracted thousands of people.
The Australian Government built the light house and last year paid for the repainting of it.
The Coast Watchers Memorial Lighthouse was dedicated in 1959 to the mostly Australian and British soldiers and civilian volunteers who served as coast watchers during WW11.
Many of these brave men radioed the positions of Japanese ships to the Allies from Japanese-held territory such as one of the many islands surrounding New Guinea.
Posted by Malum Nalu at 8/10/2009 08:57:00 PM