Rubber freight subsidies an example for other agricultural commodities 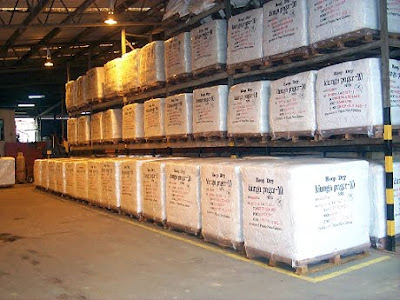 The final product from North Fly Rubber Ltd ready for export.-Picture by NFRL

Papua New Guinea Rubber Board chairman Warren Dutton last Thursday called for National Agriculture Development Plan (NADP) funds to be spent on freight subsidies to move rubber and other commodities forward.
Mr Dutton, who is also chairman of North Fly Rubber Ltd (NFRL) and a former politician, told the National Development Forum in Port Moresby that only then could more money be put into the pockets of rural people as well as prop up PNG’s agricultural exports.
He cited the example of NFRL, the only successful smallholder rubber project in the country, as one of what could be achieved through freight subsidies.
NFRL currently produces the highest quality PNGCR10 (rubber) in PNG and exports to markets throughout Europe and Australia.
Since 1995, NFR has exported over 9, 442 tonnes of smallholders’ processed rubber to overseas markets, earning foreign exchange of K28.6 million and providing income of over K13.1m to the smallholder shareholders of the company
Mr Dutton said other reasons for NFRL being a success story was because of hard working village rubber growers, and a public private partnership (PPP).
The PPP was originally between NFRL which the rubber growers own and Ok Tedi Mining Ltd, but this has since grown to take on PNG Sustainable Development Program and the Fly River provincial government.
In 1992, OTML agreed to provide K100, 000 in loan capital as well as provide subsidised (free) shipment of containers of PNGCR10 rubber to Port Moresby or an international port for on-shipment to international buyers.
“The shipment of three or four containers of PNGCR10 rubber among a backload of over 100 empty containers cost OTML virtually nothing,” Mr Dutton said,
“In 1992, it allowed the rubber growers to be paid an extra 25t per kg for their cup lump.
“In 2008, it allowed for an extra 43t per kg.
“Without freight subsidies, there could be no rubber industry in the Western province.
“Without subsidies, there could be so much less agricultural production by the farmers in the major countries of the G8 and G20.
“Without subsidies, the production of most of the smallholder crops in PNG has been in continual decline.
“Production has been in decline ever since PNG destroyed its plantation industry and the partnerships which the plantations have with their neighbouring smallholders.”
Mr Dutton emphasised that the government’s policy of encouraging PPPs was “correct” because it would help rebuild the relationship which used to exist between smallholders and expert agricultural; investors.
“These expert agricultural investors are then responsible for providing the training, the transport, and the marketing for their neighbouring smallholders,” he said.
“Most importantly, they must pay an acceptable price for the smallholders’ products.”
Posted by Malum Nalu at 8/09/2009 05:20:00 PM