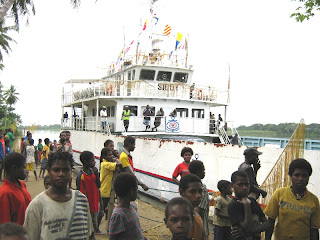 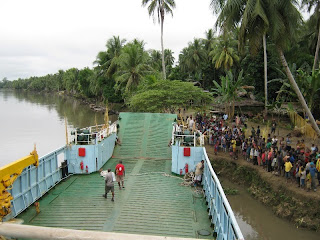 A NEW cargo and passenger barge called mv Siddy is certain to boost transportation along the mighty Sepik River.
The ship was launched last week at Timbunke purposely to serve the Sepik River people under the Community Water Transport Programme (CWTP).
The CWTP supports implementing the sector reform programme with the National Maritime Safety Authority (NMSA), which is in line with the recent government Medium Term Development Strategy (MTDS) and National Transport Development Programme (NTDP).
It is mandated to provide viable and effective maritime transport services to selected remote and disadvantaged communities in the coastal and river based areas of PNG.
It also will establish a trust fund that will provide a source of finance to subsidise transport costs to selected remote and disadvantaged communities, restore small water transport infrastructure, improve small craft safety, and induce the ability of the affected communities to take full advantage of the benefits of transport provided.
About a month ago, the ship was christened mv Siddy by Lutheran Shipping on Siassi Island in memory of one of the company’s pioneer local captains, who died while on duty in the wheel-house some years back.
The ship was purchased by Lutheran Shipping in Pusan City, SouthKorea.
Four expert navigators from Luship travelled to Korea to bring her into PNG waters.
Captain Emmanuel Akau, of Manus and East Sepik parentage, said the ship under the programme of the CWTP would be making 13 stops along the Sepik River for two weeks.
mv Siddy stretches around 50 metres in length and is fully equipped with modern navigational aids including radar, depth sonar sound system, radio communications, inflated life rafts and jackets.
The ship also has two spacious air-conditioned cabins for 13 crew and 200 passengers (upper and lower decks).
According to chief engineer, William Robui, the ship was installed with a 570-horsepower Yanmar diesel-operated engine as well a Daewoo generator set capable of producing 137.5 KVA or 110 KW of electricity on board.
Both the skipper Mr Akau and the chief engineer Mr Robui were very helpful in hosting a team of journalists who boarded the ship at Angoram.
Mr Robui helped by providing electricity from a stand-by portable generator set to help journalists to charge batteries for their mobile telephones and laptops.
Many of the people, especially villagers along the Sepik River, expressed appreciation at having the ship providing transport for their produce such as cocoa, sago, fish and other agricultural produce.
Angoram MP and Public Enterprises Minister Arthur Somare, who officiated at the launch of the ship for its travel along the Sepik at Timbunke, said the CWTP was funded by the Asian Development Bank and co-funded by OPEC Fund for International Development and the PNG National Government.
Posted by Malum Nalu at 8/11/2009 09:19:00 PM