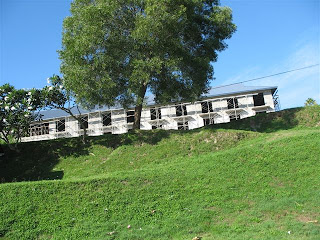 Picture of new hotel from the Golf Course.-Picture courtesy of NAMBAWAN SUPER 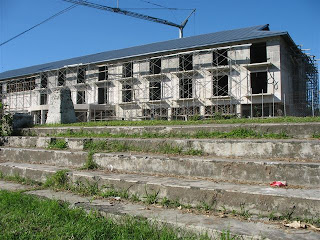 Picture of new hotel with the original steps of Queen Emma’s residence which has been retained and developed as a tourist attraction. - Picture courtesy of NAMBAWAN SUPER
The historic site of Queen Emma’s residence at Ralum near Kokopo in East New Britain will soon become an impressive three-storey hotel called Gazelle International.
Construction work started early this year on the multi-million kina hotel which is jointly owned by the largest superannuation fund Nambawan Super Ltd which has majority shareholding, plus Airways Hotel and East New Britain provincial government.
The owners of the new development have taken into account the invaluable historical significance of the hotel site and have modeled the design of the hotel to reflect as much as possible Queen Emma’s original house.
This included renovating the original steps of the Queen Emma residence as a drawcard and a major tourist attraction.
The steps are still located on the hotel property leading towards the golf course.
The hotel will comprise a reception, lobby shop, coffee lounge, restaurant, bar and poker machines all on the ground floor, while a total of 52 rooms make up the two upper floors.
Other amenities will include a resort pool, and a separate conference building which will seat up to about 150 persons.
In recent years, an influx of people have been attracted to Kokopo for conferences and a real need for good facilities have been unavailable to cater for their needs.
The builders for the hotel are Lamana Development Limited while the architect is Peter Kubli of Cairns.
According to the builders, the Gazelle International Hotel is designed to cater for a mix of customers, international tourists as well as conference people and weekenders.
All rooms will have spectacular views over-looking the blue waters of Blanche Bay and looking up to the green hills of Kokopo.
Building material for the hotel is mostly from PNG and via PNG suppliers.
Specialised equipment and furnishings are imported from various countries.
The hotel which is expected to be completed early 2010, will bring about greater employment opportunities creating jobs for around 60 people, and will also contribute to boosting the province’s economy through the development of tourism.
The hotel project managers agree: “Kokopo is a significant economic centre in Papua New Guinea plus it has an enormous untapped tourism potential.
"Rabaul, before the volcanic eruptions was held in high esteem as the most beautiful town in the country.
"We believe Kokopo will continue to expand, and with its unique mix of natural wonders, will attract people to visit this beautiful part of the world”.
Managing director of Nambawan Super Leon Buskens said the new hotel investment should not be seen as competing with existing accommodation facilities but rather complementing them as the hotel is pitched at another segment of the market.
The larger conference room facility compared to the accommodation will mean sharing of rooms within the Kokopo market
Mr Buskens said: “We are looking also at spreading our investments outside of Port Moresby and Lae where the investment returns are sustainable.
"The principle of partnership is one of long-term strategic value with the Lamana/Airways group which means that we are tapping into a proven and quality local brand with international standards, while the provincial government business arms bring local content and business alignment with provincial governments.
"Already one such model is operating in Alotau, in the Alotau International Hotel.
"Likewise, the Fund is also looking at the other centres to create a local hotel chain with international quality standards”.
He added that the partnership provided much needed training and development of local people as well as expertise in international hotel management services through the Airways/Lamana group.
Conversely, the involvement of provincial governments provides local representation and content.
Mr Buskens thanked the East New Britain provincial government for adopting a business friendly approach in enabling the international hotel venture to become a reality.
Posted by Malum Nalu at 8/11/2009 09:33:00 PM