Papua New Guinea women answer the call of the air 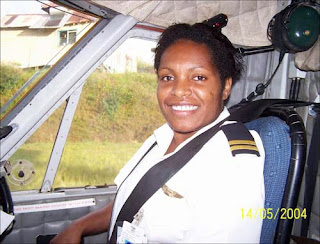 You can fly higher than an eagle...Rachael Kaltia in an Airlines PNG plane

Like the great American women pilot Amelia Earhart, whose last port of call was Lae, Morobe province, on July 2, 1937, more and more young Papua New Guinea women are taking to the skies.
During the five years remaining in her life, Earhart acted as a tireless champion for commercial aviation and for women's rights.
Two of these young PNG women pilots, Rachael Kaltia and now Jannie Moala, answered this high flying call and like Earhart lost their lives in their love and passion for the air.
While all attention over the last week has been on Ms Moala, captain of the ill-fated Airlines PNG Twin Otter that crashed over the Kokoda Trail last week, Ms Kaltia was the first PNG woman pilot to lose her life while flying.
Ms Kaltia, 24, one of PNG’s first women pilots, was killed in an Airlines PNG Twin Otter crash in Goilala, Central province, along with Australian Philip Wiseman on July 28, 2004.
She was born on March 14, 1980, and completed her primary school at Kuma community school, Southern Highlands province, in 1993.
She went on to do her top-up at Biro top-up primary school in 1995.
Ms Kaltia continued her tertiary education and completed her Grade 12 at Mogol secondary school in Mendi, and was awarded an AusAID scholarship to do pilot training in Australia in 1999.
In 2000, she commended her pilot training in Avondale School of Aviation in Sydney and achieved a commercial pilot’s license (theory) and private pilot’s license.
She further graduated with a certificate in aviation (private pilot’s license) at Avondale in 2001.
In 2002, Ms Kaltia completed commercial pilot’s license, command multi-engine and instrument rating at Avondale.
Airlines PNG first employed her as a first officer in March 2002 until her tragic death.
Young Papua New Guineans, especially women, were urged in 2004 to take the life of the late Rachael Kaltia as a role model.
Airlines PNG then general manager Simon Wild made the call during Ms Kaltia’s funeral service at the Sione Kami United Church on Friday, Aug 13, 2004.
Mr Wild urged the congregation that whenever they saw an eagle saw by, “in our minds, we can see Rachael fly by, in a Twin Otter, with that fantastic smile”.
“We pray that Rachael has set a shining example for all Papua New Guineans, the professionalism she showed, the dedication, the hard work,” he said.
“The hard work Rachael had put in, in Australia, showed that she had the ability to get up there and stand, amongst not only other Papua New Guinean men, but among expatriates from all around the world.
“I put it up, amongst the next generation of Papua New Guineans and young girls, to set Rachael’s life as a role model of what you can accomplish by putting in that dedication.
“She was a true professional.”
Last Tuesday, PNG again lost one of its bright young stars, when Jannie Moala crashed on the Kokoda Trail.
Posted by Malum Nalu at 8/18/2009 09:35:00 PM