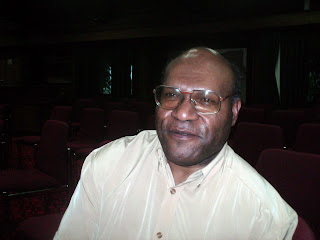 Former Department of Agriculture and Livestock Secretary Mathew’Wela Kanua (pictured) says the massive National Agriculture Development Plan (NADP) is doomed to failure because its initial recommendations are not being adhered to and will also have a drastic effect on the agriculture sector in Papua New Guinea.
He said this as this year’s NADP allocation of K100 million has been just about finished with no proper accountability and much of it going to dubious projects and individuals.
The government plans to inject a massive K1 billion, K100m a year for the next 10 years, to prop up agriculture in the country but this has backfired with many questions now being asked about the NADP.
Mr Kanua, one of the architects of the NADP during his tenure as DAL Secretary from 2002-2006, said after last week’s National Development Forum that the NADP was never intended to replace government public investment programme (PIP) funding.
He said this was a “recipe for disaster” and the biggest loser would be the agriculture sector.
“The NADP was not intended to replace the development budget of agriculture,” Mr Kanua said.
“NADP was created to be an investment fund for agriculture.
“What has actually happened is that NADP has replaced the PIP for agriculture and made the sector worse off than it was.
“For instance, the agriculture development budget used to average about K75-K85m annually.
“NADP has subsumed all the K85m with no extra funding for investment, so the sector is worse off than it was.
“The NADP was supposed to mobilise customary land and identify potential for large projects, using the model of New Britain Palm Oil Ltd, with the government partnering with the private sector to develop one to two large projects in less-developed provinces every year.
“Over the tenure of the NADP, with private sector investment as well, the benefits would be tenfold.
“To do this, you need to set the NADP as appropriate legislation and corporatise the DAL, build up its capacity to deliver the NADP.
“It’s sad none of this is happening.
“And it’s also sad that all recommendations to improve it are mere recipes for disaster.
“It’s very heartening that the Chief Secretary Manasupe Zurenuoc has noted this.”
Mr Kanua said the only solution to making the NADP work was to go back to its original design.
He said various recommendations including streamlining of various layers of bureaucracy to improve the management and disbursement of NADAP funds would not
“I took care of the NADP planning process for six years under (former DAL Secretary) Utula Samana,” Mr Kanua said.
“When I left (as Secretary in 2006), I left a draft NADP, which was not the NADP that was intended.
“I left my hard notes to the incoming Secretary Anton Benjamin.
“I also wrote a letter to (then DAL) Minister Sasa Zibe, giving him a copy of the way forward.
“When John Hickey came in, I wrote another letter.
“I still have a copy.
“What everybody has to realise is that the NADP has been through three years of rigorous consultation provided by the economic sector ministers, headed by Bart Philemon.
“The plan is very simple: provide economic solutions to the myriad of social and cultural problems including mobilisation of land to grow the agricultural economy.
Posted by Malum Nalu at 8/09/2009 07:32:00 PM