'Unproductive' public servants under the spotlight 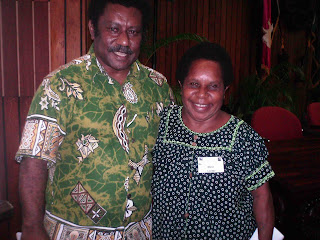 
The ‘unproductive’ public servants of Waigani came under the spotlight again at the National Development Forum at Parliament last Friday.
This led to Acting Chief Secretary Manasupe Zurenuoc, who was visibly disappointed at the lack of attendance by senior and rank-and-file public servants, vowing to change the mindset of the huge and inefficient Waigani bureaucracy.
Mr Zurenuoc bluntly said when closing the forum that the entire public service needed a complete overhaul to make it click.
Ironically, that same day, the no-nonsense former Morobe Administrator had in the media likened Waigani public servants to “headless chooks” who wander aimlessly around Port Moresby without care or knowledge about what was happening in the provinces.
Concern was also raised at the Consultative Implementation and Monitoring Council forum about the lack of interest shown by politicians in this very important public meeting.
Speaker after speaker – some of whom had paid for their own travel from other parts of the country - raised the same concern at the lack of interest shown by public servants, particularly from the Department of Agriculture and Livestock, given that the forum focused on “Opening up opportunities for agriculture and rural development”.
Many wanted answers about the massive National Agriculture Development Plan (NADP), for which the government has injected K100 million into agriculture this year – money that has already been used up without proper accountability.
Like DAL, there was little if any attendance by the entire public service including key departments like National Planning and Monitoring, Treasury, Commerce and Industry and its line agencies, Lands and many more.
“I note with alarm your concern about people who are not here, not particularly politicians, but public servants,” Mr Zurenuoc said.
“This will continue to happen unless we change the mindset of public servants at Waigani.”
He admitted that the much talked about NADP was not working as indicated at the three-day forum.
“We know for a fact that the NADP is not working,” Mr Zurenuoc said.
“With the NADP, there is a serious problem,
“Let’s talk about NADP and making it work.”
Mr Zurenuoc said public –private partnership (PPP) was the only way to move the stagnant public service forward.
“That’s the direction that the government must go now,” he said.
Posted by Malum Nalu at 8/09/2009 07:21:00 PM