Pilot’s wife and children wait for answers about crash 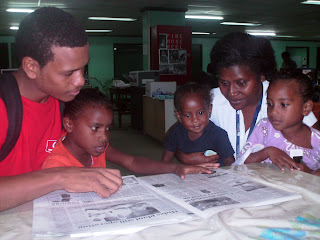 
The grieving widow and children of pilot Chris Kaines today made an emotional plea to the Civil Aviation Authority to release details of the plane crash which killed her husband on Aug 7, 2008.
Betty Kuyei Kaines, surrounded by her three daughters Emerald (seven), Answer (five) and Story (two), told of the heartbreak of losing their husband and father and of waiting for answers about his death to no avail.
She also wants the operator (named), who has been elusive since the crash, to be questioned by police and relevant authorities.
Also present at the interview was Chris Kaines Jr, 17, the pilot’s son from his first marriage to Betty Komes.
As Mrs Kaines talked, the three girls pointed out excitedly to the picture of their father in today's The National, saying “daddy, daddy”.
Chris Kaines’ Jr, a quietly-spoken young man who is a spitting image of his father, said he was hoping to follow his father’s footsteps and become a pilot.
While all attention is focused on the Aug 11 Airlines PNG Twin Otter crash which killed 13 people, Kaines’ crash over the Kokoda Trail last year almost exactly a year ago to the date, remains uninvestigated.
Kaines, from Gassam village on Siassi Island, Morobe province, died in a mysterious Cessna 206 plane crash in the mountains of Myola, along the Kokoda Trail, on Thursday, August 7, 2008, on the way to Yongai in Goilala.
Details are sketchy; however, the general story is that Kaines, a very experienced pilot, was with two passengers when they experienced engine failure at Myola.
He successfully brought the Cessna down and saved his two passengers but was crushed in the cockpit; however, his body remained intact.
Kaines’ baby, Story, would celebrate her first birthday on Saturday, Aug 9, and he was looking forward to joining her for a party.
He, tragically, would never do so.
“It’s very, very challenging, especially to take up the role of both father and mother,” Mrs Kaines said as she fought back tears.
“For us to wait in vain for someone, at least someone, to give us a definite report on the crash is so painful.
“All we want to know is how he crashed.
“The Civil Aviation Authority should give us something, at least something in writing, so that we can be satisfied.”
Mrs Kaines is saddened that while last week’s crash has taken precedence over all others, with CAA chief executive officer Joseph Kintau saying a preliminary report should be ready after 30 days, while she and many other pilot widows and children continue to wait.
“When I heard them say that a report of last week’s crash would be ready in 30 days, I said, ‘wow, but what about Chris?’” she said.
“I feel that it’s unfair for the Airlines PNG crash at Kokoda to be given priority, just because it involved Australians, and they are rushing to produce a report upon demand.
“If they can produce a report for the Australians within 30 days, how about us?
“We’ve waited for a year!
“Our father was a local pilot, carrying local teachers from Port Moresby to Goilala, and his death didn’t attract much media attention, therefore, it has been swept under the carpet.
“At least we can have peace of mind if we know the cause of Chris’ death.
“They have to tell us whether it was because of a mechanical fault, weather, pilot error, whatever.
“To those families who have lost loved ones in last week’s crash and in previous crashes, their loss is our loss.
“We share the same concern as them, the anxiety of waiting for the body, of waiting for the sound of choppers and planes bringing in the body.”
Posted by Malum Nalu at 8/19/2009 08:59:00 PM