Lae poem brings back memories of another day 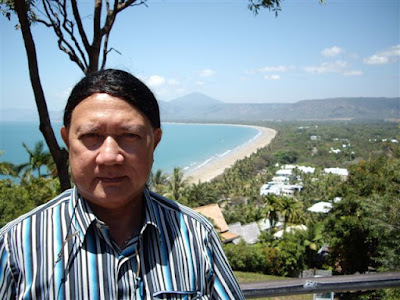 Bernard Oberleuter…his heart is still in Lae and PNG 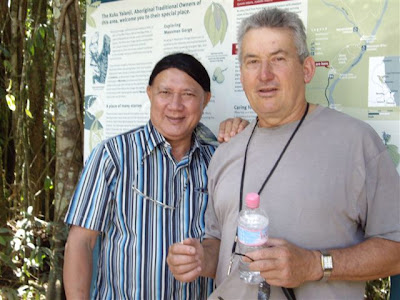 A heart-warming poem written about Lae and Papua New Guinea in its glory days brought tears to the eyes of many former Lae residents who gathered for an emotional Lae-Markham Reunion get together in Brisbane last month.
The 2009 Lae-Markham reunion at Broncos Leagues Club, Fulcher Road, Red Hill, on Sunday, Oct 4 was a resounding success - an absolutely magical day – which brought together 350-odd people.
Many people present hadn't seen each other for 40 years or more, and the auditorium echoed with cries of recognition, accompanied by heaps of hugs and occasional happy tears.
The 2009 guest list reads like a who’s who of Lae and PNG.
As they listened to the magical words of New Guinea, a poem written by Lae boy and now Brisbane resident Bernard Oberleuter so many years ago, there was not a dry eye in the Broncos Leagues Club.
It brought back memories about a place they called “home” – that since 1975 has deteriorated from the beautiful “Garden City” to the "Pothole Capital” of PNG.

I know a verdant island fair, with forests, ferns and flowers rare,
Where mountains tower to the sky, and lovely fertile valleys lie.
Where flit the gaudy butterflies and hum the birds of paradise.
Where summer holds eternal sway; her people live so free and gay.
New Guinea, gem of the southern sea, what wondrous charms you hold for me.
One place upon our friendly strand is treasured more than all this land.
Tis Lae, my home on Huon shores, so fondly called the open door,
The open door to hills that hold vast quantities of richest gold.
Our buzzing dromes, our wharves, our shops With busy life forever throbs.
Our jungle nooks to hikes invite, our pools and brooks with tempting sights.
The ancient hills, the ocean blue, what grandeur great presents to you.
God bless our lovely isle and Lae, and make us more her own each day

Mr Oberleuter, a good friend of mine, admitted that he too had tears in his eyes as he heard his poem being read by another Lae boy Tony Strachan, son of Arthur Strachan, founder of the famous real estate company of Lae by the same name.
He recalls that he was getting ready for his Grade 6 external exams for a government scholarship to study in Australia when he wrote the poem.
“It was at St Mary's Primary School, opposite Lae Bowling Club,” he remembers.
“I was asked by the nun-in-charge, Sr Marinoma, to read it out to the class, who applauded me with a standing ovation.
“That year, I also excelled in my external examinations by coming second in over 1,200 students, in TPNG, only missing out by 2% in my maths tests to equal first place.
“Previous to that, I was at the old St Mary's School, next to the old Morobe Bakery.
“This school site is now where the famous Lae Rugby League grounds sit, where I use to play my junior rugby league, coached by Barry Orchard and Bill Doherty of PWD (Public Works Department).
“They both played for the mighty Comworks RLFC.
“Mr Jack Amesbury was instrumental in starting me to play rugby league, soccer, hockey and Aussie rules. I played all over the back line, including fullback. I was the youngest player to represent Lae at the senior level.
“My dad worked for Public Works Department as a builder.
“My mum did freelance dress making and then she was in charge of the Melanesian laundry facilities.
“My dad built the very first Markham Bridge.
“We later transferred to Finschhafen, where I went to Gagidu Primary T School.
“He was posted there for a couple of years, built and maintained government housing and also built the first Nasigalatu Bridge near Dregerhhafen.
“I was born at the old Malahang hausik (hospital), near the feisty waters of the Busu wara.
“This WWII hausik then moved to uptown where Morobe Pharmacy is now situated.
“Then another move further just to the left of Steamships on 8th Street and opposite the Lae Coronation Primary 'A' School.
“Mr Tony Sadgrove was headmaster then.
“The hospital made a final move down town opposite to the old Lae airport to its final resting place, where it stands today.
“I have very fond and good memories of my childhood upbringing.
“I could walk anywhere, anytime, in Lae...hail, rain or shine, any hour of the clock.
“I use to do my training by running from Rotten Row Rd, behind the Hotel Cecil, to the athletics oval and back again, every morning during the footy season.
“We were living in Chinatown near the old Lae pumping station, close to Bumbu River.
“I remember walking from Butibum Village to Kamkumung.
“I use to go swimming at Voco Point, and at the mouth of the Bumbu River.
“We used to walk along the beach all the way to Sipaia, where the old Japanese warship was beached and rusted.
“We use to climb onto it and play hide and seek.
“The old Tanyo Maru was still protruding and visible at the end of the Lae airport runway, where Crowley Airways and MAL hangared all their aeroplanes.
“We use to go in a canoe to catch the pigeons that nested on the exposed bow of the warship.
“I enjoyed my growing up in Lae, Mumeng, Bulolo, Wau, Kaiapit, Finschhafen, Madang and Port Moresby.
“I treasure those fleeting moments and memories.
“I lived and loved for my home Lae as a child growing up to 12 years old.
“I, unlike all the other ex-Territorians, have no desire to return to PNG.
“I only want to remember it, the way it was, when I left it.
“You see, the writing was on the wall for people like myself.
“We would become second-class citizens and those in the power of politics would ensure that their very own kin or clan would rise in the hierarchy, in the scheme of things to follow, after 1975.
“The proof is in the pudding.
“See for yourself now after 34 years of independence.”
Posted by Malum Nalu at 11/27/2009 12:00:00 AM