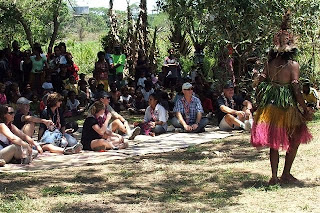 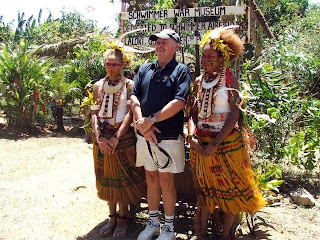 An impromptu war museum at the site of what used to be Schwimmer Drome at Laloki, on the banks of the great river of the same name, is becoming a must-visit for tourists to Port Moresby.
The museum is run by Thomas Richard Auhava, from Iokea in the Gulf province, without any assistance from organisations such as the National Museum and Art Gallery as well as the Tourism Promotion Authority.
Ironically, last month, when visiting tourist cruise ship Rhapsody of the Sea visited Port Moresby, tourists who were turned away from the NMAG ended up visiting Mr Auhava’s ad hoc museum (pictures above, by Eco Tourism Melanesia).
Mr Auhava has, over the years, been collecting numerous war relics in and around the site of the old Schwimmer Drome in a labour-of-love.
He is fighting a lonely battle against scrap metal hunters and dealers, who without any scruples do anything to get an extra buck.
He has brought a proposal to the NMAG in Waigani, Port Moresby, for funding to set up a proper museum, as well as the TPA, but to no avail,
Mr Auhava has been living at Laloki for the last 20 years and knows every nook and cranny in the area.
“Over the years,” says the former PNG Defence Force soldier, “I’ve been collecting these war relics and I’ve been featured in newspapers.
“Because of this media publicity, tourists started visiting, and I’ve decided to start a proper museum.”
The war relics include human bones, helmets, dog tags, tools, hand grenades (defused), bombshells, bullets, coins, jerry cans, 1940’s Coca-Cola bottles and assorted paraphernalia.
One of the prized possessions of the collection is the remains of the plane of Australian air ace, John Jackson, after whom Port Moresby’s famous Jackson’s International Airport is named.
Jackson crashed on the hills overlooking Laloki after a heroic dogfight against Japanese fighters.
“History is very important,” Mr Auhava extols.
“This generation, unfortunately, doesn’t seem to know anything about the war.
“Historical sites like Schwimmers should be preserved for educational purposes, tourism, etc.
“These relics should be preserved and protected.
“Scrap metal vendors are getting their hands on these war relics.
“If we lose these war relics, we lose history.
“People are just taking them out and selling them to scrap metal dealers.
“I decided to bring them all to one place and take care of them.
“After that, I began to find out about the place itself, its history.
“I borrowed some WW11 books from a historian and did research.
“I realised that it (Schwimmers) was a WW11 US airbase.”