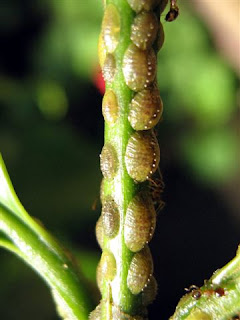 Coffee green scale (CGS) is currently the most-serious pest affecting the industry in .

This was revealed during a project review meeting between the Coffee Industry Corporation (CIC) and the Australian Centre for International Agricultural Research (ACIAR).

Under the Australian Government, ACIAR funded a project on sustainable management of CGS in PNG undertaken by the CIC.

A major ecological survey under the project confirmed that CGS was most prevalent at 1500 metres above sea level.

Other surveys conducted by CIC showed that CGS was a major coffee pest and widespread in smallholder gardens.

The pest is widely distributed and present in most coffee growing areas, attacking both Arabica and Robusta coffee species.

They are oval-shaped, flat and pale green in colour.

They are often associated with ants and sooty mould fungus.

The ants and fungus feed on the honeydew excreted by the scales.

The scales suck the sap of mature and young coffee trees.

In mature coffee trees, the scales and sooty mould affect the fruiting parts of coffee, while the young coffee trees have a reduced growth and eventually die due to heavy infestation.

Farmers can sustain coffee green scale infestation on the tree if infestation is at the lower and middle canopy level.

However, if infestation reaches top canopy, the cost of sustaining the crop increases and the coffee tree is likely to die.

To combat CGS on the crop, biological controls of the pest have been introduced including some cultural measures in addition to conventional chemical controls.

Cultural, biological and chemical controls are essential for the management of this pest.

Cultural control involve pruning of the unwanted or targeted parts of the crop. Biological control is the release of natural enemies of green scale and chemical control requires the use of chemicals only on heavily invested coffee blocks.

Extensive research on CGS is being carried out by CIC in collaboration with national and international partners.

An evaluation of exotic biological control agents and other potential control methods is being carried out also taking into account grower information.

Based on the findings,  regional and national strategies would be developed for a implementation of CGS control.