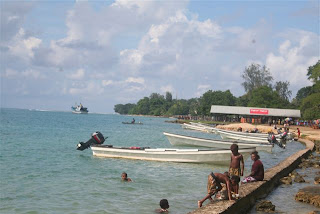 province is making a comeback from the setbacks of the last few years, according to Governor Sir Julius Chan.

The former Prime Minister said in Kavieng last Friday that he had rehashed the political system and totally realigned the public service.

Although Sir Julius did not mention it, it is understood that he was referring to his predecessor Ian Ling-Stuckey, whose illegal financial and administrative system known as the “Limus Structure” brought about massive problems during his tenure.

An investigation into the financial dealings of the provincial government between 2002-2007 has found instances of systemic and blatant abuse of financial and administrative process, gross misuse and misappropriation of public funds totaling over K64 million in five years.

According to the report, the illegal Limus Structure was organised by Mr Ling-Stuckey and Kavieng MP Martin Aini.

It was a pyramid-type structure where Mr Ling Stuckey was positioned at the top followed by the two open MPs from the province (Kavieng and Namatanai) then the district coordinators, local level government coordinators, ward coordinators then down to segments of the community then onto individuals.

Tabling the report in the provincial assembly on Sept 9 this year, Sir Julius recommended for the Ombudsman Commission to carry out a detailed investigation into the leadership culture perpetrated under Mr Ling-Stuckey’s administration.

During the five-year period over K64m of public investment funds belonging to  Papua New Guinean taxpayers were unaccounted for.

Sir Julius said at last Friday’s graduation at the that he was determined “to transform province into a self-reliant, autonomous part of PNG that is efficient, market-orientated and internationally-competitive”.

“We are fully aware that to make the Malangan Declaration real – bold and visionary leadership at all levels, from Members of Parliament, Governor, public service and local government councilors,” he said.

“Already, we have rehashed the political system, totally realigned the public service, making it more operational, effective, transparent and accountable, rejecting self-interest and weed out all forms of cronyism and corruption.

“Our mission is to be a force for positive change, to inspire others to greatness through being a catalyst for action – always striving to continually invent the future out of our imagination.

“Ours is not a fixed period or a 40-year strategic plan but a spiritual, living document of hope – clinging to the unchanging principles but adjust to changing times.

“Unlike our sick and stifled Parliament, we insist on full participatory democracy in that the people of New Ireland, however remote, come together to dedicate and commit themselves to create a society in which the powerful and weak, rich and poor, work together to extend the benefits of development to all the people; promote unity, peace and a common resolve so that the province will realise its full potential and that no-one shall be left behind in the development of the province.”