Alekano: a first for University of Goroka and Papua New Guinea 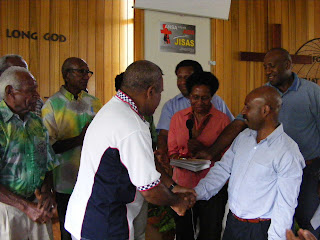 Elders and other supporters of the Alekano community handing over the Alekano study books to officially release the language and be taught at UOG.-Picture by KATE GUNN of UOG

This year saw the advent of the first group of 30 students study Alekano for Beginners, taught by Mr Philip Tama at the University of Goroka, Language and Literature Department.
This is the first group of UOG students to study the Alekano language as an academic subject. The Alekano dictionary was launched at the University in June of last year.
UOG is the only institution in the country to teach a Papua New Guinean language at university level.
A special gathering was held on Friday 6th November 2009, to officially release the language, and its embedded culture, to the University of Goroka for the teaching of Alekano to its students. This was symbolically conducted by the nine village elders of the Alekano-speaking tribes who were present to cut the ribbon which bound all materials and books used by the students for class (including the Alekano dictionary).
President of the Alekano Gako’ Otitive Group, Evangelist Bryan Kayho, said he was happy that the Alekano language was being studied by students from other provinces around PNG.
He also commended UOG for helping save Alekano from dying out.
The gathering was also witnessed by other prominent leaders of the Goroka community.
Mr Michael Gotaha also showed his support for the preservation of Alekano on the day.
In a speech by the Head of the Language and Literature Department, Ms Anne-Marie Wanamp, the gathering was reminded that “your tok ples (own language) is your identity, is your culture… and gives you a sense of belonging. Your language gives you your tools for self definition”.
Ms Wanamp also thanked the Alekano communities for their support in the collaborative effort to promote and preserve the language.
The Language and Literature students who studied the introductory course for Alekano said that they chose it as they wanted to help strengthen knowledge of the language, and because it gave them the motivation to help preserve their own tok ples.
The formation of the Alekano Gako’ Otitive Group was for the promotion and preservation of its language and the culture.
This is comprised of nine tribes from 50 villages around the Goroka area, with a total of approximately 47,000 speakers of Alekano.
Apart from Alekano the Language and Literature Department also teaches Japanese and French.
Due to a high level of interest in Languages Other Than English (LOTE) courses, the University of Goroka will offer a continuation of these languages in the near future.