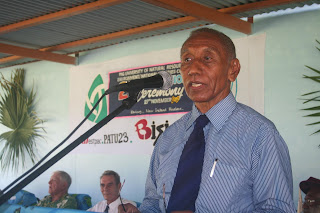 From MALUM NALU in Kavieng

And he urged them to get rid of the government if it didn't perform to their expectations.

He said it was no secret that PNG had gone backwards since 1975 and the largely-corrupt government was to blame for this.

Sir Julius, after taking the students and crowd through a lengthy talk on corruption in PNG, told them that the old guard like himself were going out and they were the ones who would have big shoes to fit in.

"The young people of the world are a force for good and a force for change," he told them.

"So go forth to your homes and spread the message.

"Spread the message of responsibility, of hard work and of hope.

"Spread the message that government must tell the people in clear and unequivocal terms what it is doing to improve the lives of the people.

"And if it does not keep its word, spread the message that it will be cast out and replaced with those who will.

"The time of the free ride is over.

'Either provide benefits or get out!"

Sir Julius said the corruption perception index compiled each year by Transparency International spokes volumes about the level of corruption among public servants and politicians.

"Papua New Guinea has only been rated for the last five six years," he said.

"But in this short time, the country has been perceived as increasingly-corrupt and a very difficult environment in which to do business.

"We were two-thirds down the list; there were 43 countries considered as more corrupt than PNG.

"And in the most-recent year, 2008, PNG had slipped all the way to 151st out of 179 countries, so only 28 countries were considered more corrupt.

"Any rational observer would have to say that this is a major contributing factor to the failure of the state to ensure that the fruits of development are shared by the people of the country.

"/though I do not like saying it, the evidence is that PNG has a shell of democratic institutions, it has had macroeconomic growth, but beneath this thin cover is a system that is working for the benefit of a few and not the masses.

"We know that wealth is distributed very unevenly, and that the public officials and politicians are seen as among the most-corrupt in the world.

"So is it any wonder that the benefits do not get to the people?"