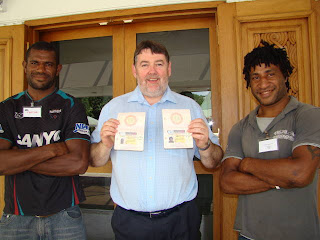 The British High Commission has issued visas to two Papua New Guinean rugby league players to play in the .

Larsen Marabe and Jessie Joe Parker will play for the second division side Featherstone Rovers and depart this week.

“We are very happy to be given this opportunity to play in the and we will strive to do our best on the field as well as be ambassadors for our country,” they both said after receiving their visas from the British High Commission.

British High Commissioner to PNG, David Dunn, praised the duo for being able to secure contracts with Featherstone Rovers and alerted them to the 2009 success of colleague Kumuls Menzie Yere, Charlie Wabo, Nico Slain and Michael Mark.

“Menzie Yere, Charlie Wabo, Nico Slain and Michael Mark have been able to stamp their mark in the with Menzie and Michael winning awards from their respective clubs. Menzie in particular was shortlisted for the Co-operative Player of the Year award that shows the potential of PNG rugby league players when exposed at the international level. Their experience shows that there are no international barriers when it comes to playing rugby league and I wish them well,” said Mr Dunn.

UK-based PNG league veteran Stanley Gene, who was instrumental in marketing Marabe and Parker to the Featherstone Rovers, thanked the British High Commission for issuing visas to Marabe and Parker and said it was their chance to experience life as a footballer in the .

“It's an opportunity for these players to see the other side of the world, experience different cultures and make a living out of it. They will be coached and trained by the best people and play a high standard of football – which will only help the PNG Kumuls in the future. Lastly I would like to appeal to the boys to take this opportunity, enjoy their time in the and always remember that they are representing PNG both on and off the field,” he added.

The departure of Marabe and Parker now brings the number of PNG Kumul players in the to 10. The others include Gene, Makali Aizue (both with Halifax RLFC), John Wilshire (Salford Reds RLFC) and Jason Chan (Celtic Crusaders RLFC).