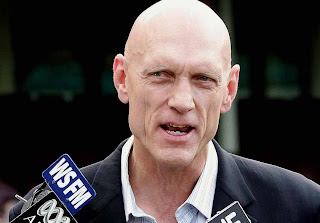 PETER GARRETT is the new patron of the Montevideo Maru Memorial Committee.

In February, he will take over the role from Prof Kim Beazley, recently appointed as ’s ambassador to the .

The Committee was established a year ago to ensure greater national recognition for events surrounding the fall of Rabaul in 1942 and ’s greatest maritime disaster, the sinking of the Montevideo Maru with the loss of 1,053 troops and civilians.

Peter Garrett’s grandfather, Tom Vernon Garrett, was a prisoner on the Montevideo Maru.

Tom, a planter, was born in and served in World War I with the 6th Light Horse Regiment.

He lived at Varzin Plantation on and was 54 when he died.

“My grandfather’s death was mentioned in passing at family events, but it wasn’t until my mid-twenties, when I saw an article concerning the incident, that my understanding was filled in,” Mr Garrett said.

“It’s time to fill a huge gap in our history,” Mr Garrett said.

“By giving recognition to one of the most significant and tragic events of World War II, we can honor those who lost their lives and provide a much-needed commemoration of this extraordinary event.”

“The sinking of the Montevideo Maru was one of the most significant events of World War II but is still relatively little known. It is an important part of ’s history and, given my family connection, I was pleased to become Patron of the committee.”

Peter Garrett AM MP was elected Labor Member for the electorate of Kingsford Smith at the 2004 federal election and was appointed Minister for the Environment, Heritage and the Arts following the election of the Rudd Labor Government in November 2007.

He is a passionate advocate and campaigner on a range of Australian and global issues, particularly related to the arts and the environment.

He came to public prominence as a member and lead singer of the Australian band, Midnight Oil.

In this role, he wrote the lyrics of a popular song, In The Valley, which drew its power from the Montevideo Maru sinking and other tragic events that had affected his family.

My grandfather went down with the

The rising sun sent him floating to his rest