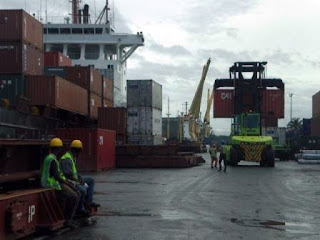 Caption:  …one of the few that is making money in the country.-Picture courtesy of PNGPCL

PNG Ports Corporation Ltd does not have the financial capacity to improve facilities through the country, according to CEO Brian Riches.

Mr Riches made this blunt assertion to staff in his 2009 Christmas message last Friday.

“Currently, PNG Ports does not have the financial capacity to improve facilities to bring them up to acceptable operating standards due to cash flow issues and funding shortfalls,” he said.

“Most of the existing wharves and berthes throughout the entire PNGPCL port network were built in the early 1960s.

“We are currently strategising maintenance and organising capital investment into the port infrastructure for the safety and operational capacity of PNGPCL’s existing infrastructure.

“Investments for capital infrastructure such as reconstruction of PNGPCL berths and new container terminals remain a high priority by the board and management.

“However, the benefits derived from investment will not be maximised unless coupled with improved operational efficiencies and performance.”

“All other ports are not considered to be commercially-viable and PNGPCL argues that they are maintained and remain open as part of the organisation’s ongoing commitment to its community service obligation,” he said.

“With the exception of Lae, and Kimbe ports, PNGPCL classifies all other ports as non-viable commercial operations.

“While the financial performance of the smaller ports has improved somewhat over the past five years, there is still considerable cross-subsidisation occurring.

“PNGPCL management is committed to creating subsidiary companies for each of these ports that would operate under the umbrella of the existing parent company.”

“Executive management is committed to the rehabilitation of the engineering department,” he said.

“Primary area of focus for engineering will be the development of maintenance and apex infrastructure for next five years, which will identify and prioritise financial expenditure requirements.

“It is recommended that the department work closely with the project team, finance department, operations and port business managers for this process to be undertaken successfully.

“For engineering to function effectively, communication with all the internal and external stakeholders will be critical to the future investment and maintenance of infrastructure and port operations.”

Mr Riches said PNGPCL also placed high emphasis on such areas as occupational health and safety (OH and S), and security at its ports due to international treaties, customs and best practice port security requirements.