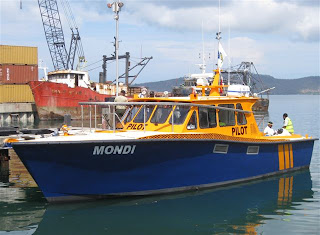 The 13.67m boat, with an aluminium superstructure and powered by two Caterpillar engines, was bought from Bundaberg Port Corporation in

Dr Temu thanked PNGPCL board of directors, CEO Brian Riches, management and the pilotage department for naming the newly-acquired boat after his wife.

Dr Temu said the board, as part of its strategic direction to move forward, had provided the CEO:

“The board is aware that PNGPCL is in the process of implementing a strategic plan to identify direction of pilotage services and revenue opportunities, e.g., Australian Reef Pilots,” he said.

“We are committed to support the PNGPCL management in meeting challenges by facilitating economic growth through quality and efficient service delivery, profitability, sustainable investment in infrastructure, exceeding stakeholder and shareholder expectations and meeting legislative and community service obligations.

“The company is currently continuing its organisational restructure, revitalisation of services and rehabilitation of facilities throughout PNG.

“We are proud to be the only pilotage service provider in PNG.

“With the inclusion of mv Mondi, PNGPCL’s pilotage services will be boosted at its port/harbour.

“PNGPCL is aiming to boost the pilotage capacity from its current 15 to 20 pilots with the assistance of Australian Reef Pilots,

“We plan to have more pilotage boats as well for the pilotage department going forward.”

“Resources include human resources and infrastructure, each of which require considerable investment to expand and provide an expanded service to other ports and provide reef and coastal pilotage services,” he said.

“Prior to a pilotage strategic review undertaken earlier this year, PNGPCL had estimated that it would have to increase its pilot numbers from 15 to 20 over the next five years.

“PNGPCL, with technical assistance from Australian Reef Pilots, has acquired the mv Mondi to boost its pilotage operations.

“In addition, there is the possibility to develop coastal pilotage services with some initial partnership approaches with Australian Reef Pilots.”