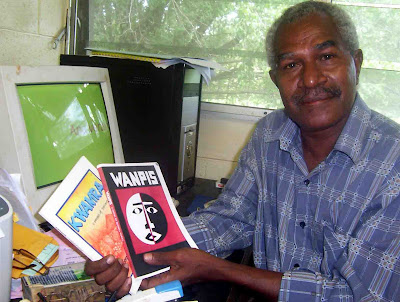 Welcome to Russell Soaba’s world.
He is the portrait of the odd man out, an individual, and a great thinker.
Russell Soaba is also one of the greatest, if not the greatest, writer in Papua New Guinea.
His works, particularly novels Maiba and Wanpis, are studied in universities around the world by students of literature and philosophy.
Followers of the existentialism philosophy around the world dote on the writings of Russell Soaba.
It is, however, a paradox that Russell Soaba is not even recognised in his own country Papua New Guinea for his great contribution to the country’s literature.
In 2006, he was awarded a Papua New Guinea independence medal, something that was supposed to have been given in 2000 but deferred because of the troubles on the University of PNG campus.
For this he is grateful, and adds that it is something for all the writers of Papua New Guinea, both young and old.
The 58-year-old, who speaks in parables, was born the “day after the 4th of July in 1950”.
“I think it’s about time,” he tells me in a rare interview.
“The only writer we have honoured, but in that matter for some other reason, is Sir Paulias Matane, with Michael Somare, Rabbie Namaliu, these people.
“But they are being honoured for some other reason than writing, and that’s the saddest thing.
“What these men must realise is that we deserve the same type of recognition as they do, even though they may think that the work they do differs from us.
“If you look at it closely, it all boils down to one important aspect of our society, and that is ‘communal service’.
“Every other journalist or scribe does exactly the same thing.
“So we must all be recognised on an equal footing.
“Ultimately, there is no denying that we all serve our community with the same amount of determination, commitment and dedication.
“What’s the difference between a good accountant who gets all his figures correct at the end of the day, and a writer who records the same sort of events in our lives, but in a different form?”
“It always comes back to what I always complain about.
“A writer is an unofficial ombudsman of the country.
“That means duties more in the area of human relationship.
“By that, I mean that as an ombudsman, or as an unofficial ombudsman, he does not set out to correct his neighbour, rather, what he is doing as that type of ombudsman, is lightly tapping a colleague on the shoulder and saying ‘listen brother, let’s no overdo this. It might have some negative results for both of us’.
“A writer is an ombudsman in that sense.
“He’s likely to correct a brother, who is likely to make a serious mistake.
“He’s acting more as a friend than a colleague or neighbour.”

Soaba then speaks three parables to me - that of the girl who does not serve him at Big Rooster, Asian efficiency as compared to his owned beloved country, and Alotau laziness – to point out the very serious attitude problem Papua New Guinea has.
“We as Papua New Guineans have this very bad attitude,” he says.
“If we change these bad attitudes, how much more easier, better and happier it would be?
“Looking at the way a writer looks at the society he lives in, and how he feels about certain things, why are things suddenly so wrong?
“We can’t blame the politicians too much.
“He is merely behaving like why is he a politician.
“The real wrong lies within out attitudes.
“I could write a long, long book about these bad attitudes we have as Papua New Guineans.
“You’re seeing the writer passing over as an unofficial ombudsman; a friend who cares to give some good advice because he cares about you.
“I see all of our writers as unofficial ombudsman of the society we live in.
“It comes back to the age-old slogan that ‘the pen is mightier than the sword’.
“Its might is seen when there’s so much of small detail faithfully recorded without any grudges, put with a great amount of passionate zeal.
“Because of its sense of simplicity, it lasts forever.”
Soaba, Australian-educated high school student from Cape Vogel in the Milne Bay Province, talks fondly about his schooling days including the visit of Prince Charles to Martyrs Memorial High School in 1967.
“We were able to push him and given him a nudge.
“It was quite an experience.”
In 1968 and 1969, this precociously-talented Papua New Guinean was awarded an Anglican Church Scholarship to Australia to complete 11 and 12 at Baldwyn High School in Melbourne.
“Around that time I read in the Melbourne Age about 10,000 Years in a Lifetime (by Albert Maori Kiki) and I became excited about a Papua New Guinean writing a book,” Soaba tells me with emotion.
“And then I read I bit in Melbourne about Uli Bier (literature lecturer) influencing on (UPNG) campus.
“Even when I qualified to enter any Australian university then, I discovered that it would be far more exciting if I came back to UPNG.
“I was able to terminate the church scholarship, come back, and apply for government scholarship at the university.
“In 1970, I became so excited meeting Leo Hannett, Uli Bier, Arthur Jawodimbari, Rabbie Namaliu, a certain angry student politician called John Kasaipwalova, and a certain angry young man from outside called Michael Somare.
“These people I felt thrilled in meeting in person in the years 1970 and 1971.
“And of course, the personality who really thrilled me most was Vincent Eri, author of the first Papua New Guinean novel called The Crocodile.
“There was another quite personality I felt proud to meet: that was the poet Kumulau Tawali, and also another poet called Jack Lahui.

“In a way, I felt proud to be among this famous group of PNG writers.
“That was it.
“Since then I attended Uli Bier’s creative writing classes.
“He exercised that same sort of influence he had in Nigeria.
“His presence merely motivated PNG writers to emerge into worldwide recognition like Vincent Eri, Albert Maori Kiki, and the plays of Leo Hannett, Arthur Jawodimbari and John Kasaipwalova.
“Writing flourished at that time.
“Since then I have enjoyed the privilege of being among these famous people.
“Since then, of course, I consider myself as a writer.
“But whether or not a successful or great writer, that is highly questionable.”
Soaba’s greatest works are Wanpis (1977) and Maiba 1986 – around the world - and poem anthologies Naked Thoughts (1978 and Kwamra (2000), among various others.
“Since then, I sort of became lazy, not really lazy, but too much of teaching commitments,” he laughs.
“As such, much of the writing that I do has dwindled.
“It’s good to work and write at the same time.”
The government, Soaba feels, must give more support to writers.
“What the government of Papua New Guinea must do is institutionalise a writers’ and artists’ endowment fund, a grant programme,” he tells me.
“The government of PNG has no choice but do what is honourable by creating a grant programme for our writers and artists throughout the country.
“There is a place where this can be housed.
“This is the National Cultural Commission.
“The National Cultural Commission does have a Literature Board.
“What the government needs to do is use the literature board as the clearing house for this grant programme.
“The Somare government must recognise that, along with any government that comes along into power.
“It’s only honourable that they entertain it, support it in the best way possible.
“Consider the percentage of tax that government solicits out from business houses, companies, corporations.
“What I would ask for is 2 per cent tax money to go towards the writers’ grant scheme.
“The government can enjoy its 98 per cent.
“We have been ignored for too long.”
I ask Soaba about how he describes in writing, which I – personally – would describe as way beyond its time.
“My writing is highly personal, very intimate,” he replies,
“It addresses the individual man than the community as a whole.
“This is because I believe that this is where things start.
“Everything starts off with an individual and progresses to two people, on three, and then the community.
“Also, the characters that I create are these Papua New Guinean individuals.
“So really, if I concentrate on an individual, that doesn’t mean that I am working alone.

“In fact I’m speaking for the whole population.
“Each of these individuals gets born, cries to be heard, becomes an individual, and becomes a Papua New Guineans man or woman.
“Their fears, the hardships that they go through, their romantic experiences, tragedies, and all these things that is most human to us.”
So how this he feel about his books being studied around the world by students of literature and philosophy?
“The books themselves are studied not only in literature out there, but also in philosophy, social work and cultural studies.
“There are a great number of universities throughout the world who use the novel Maiba as a textbook.
“There is a women’s university in the USA who use the book Maiba every now and then as a textbook.
“I recall how pleased I felt with that school at one time.
“The principal wrote to me about the book, and that they were happy to teach the book at the school, they regarded me as an up-and-coming African woman writer.
“I replied and said ‘thank you’,” Soaba laughs wickedly.
His future?
“I am really anxious to publish one more novel before I call it quits
“I have had an offer from an Italian publisher who wants to translate Maiba and Wanpis into Italian.
“I also have recently selected a biographer to write my biographer.
“The other thing I would like to add is that I want to encourage our young writers of today to write seriously about us as Papua New Guineans.
“Give ourselves some kind of identity on the face of the world.”
Posted by Malum Nalu at 7/21/2008 10:21:00 AM