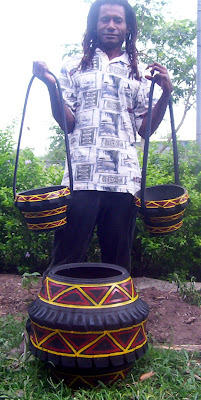 Chris Dally is familiar sight outside Gerehu Stop N Shop Supermarket, Rainbow Village, and other parts of Gerehu in Port Moresby.
The tall, dreadlocked Dally, 44, from Busamang village in the south coast of Morobe province, ekes out a living by selling beautifully-crafted flower pots made from old tyres.
Many a house in Gerehu and Rainbow Village is decorated with trademark Chris Dally flower pots.
He fashions them himself at his Gerehu Stage 5 home and then takes them to Gerehu Stop N Shop, and Rainbow Village, where his biggest clientele is.
Dally averages K300 weekly, which is enough to put food on the table for his young family, pay the bills, and put his two children to school.
He is adamant Papua New Guinea would not have such a huge unemployment problem if people eat humble pie and go into such small business.
He is also proud that he is quietly contributing to the fight against pollution and global warming by discouraging people from throwing away and burning old tyres – something for which Papua New Guineans are notorious.
But, unknown to may people, Dally isn’t just a simple flower pot peddler.
The pithy saying, “never judge a book by the cover”, rings true for him.
Chris Dally is a graduate in Building Technology from the University of Technology in Lae and, before that, completed secondary education at Sogeri National High School.
It is with disbelief that former schoolmates of university and Sogeri, friends, and wantoks pass Dally under the shady neem trees outside Gerehu Stop N Shop.
He worked with a number of firms as a building designer before, literally, being run over by old tyres.
It was quite by accident, about two years ago, that Dally took up making flower pots from old tyres.
“I learned through trial and error,” he recalls.
“I had two old types, which I sold to some men from Pindiu (Morobe province).
“They found some faults with the tyres and came back to me demanding their money back.”
Dally fashioned the two tyres into flower pots and, lo and behold, “my neighbours said that they would buy the flower pots”.
“I saw that I could make good money so I continued.
“I make small pots, large pots, and hanging ones.
“Sales are very good.
“Everything I produce is sold.
“I can make up to K300 a week.
“I pick up old tyres all over the place.
“A lot of old tyres end up being burned.
“I try to stop people from burning tyres.
“At Gerehu Stage 5, where I live, I find a lot of tyres in the main drain which runs into the swamps behind Gerehu.
“I collect the tyres, dry them, mark them with chalk, and cut them out.
“I then make holes in the tyres, wire them up, thoroughly clean them up, and paint them.
“I can make six flower pots from an average-sized tyre, which I sell for K10 each.
“So you are looking at K60 from an old tyre!
“I can make K60 per tyre, and in one week, I can work on five tyres, which add up to K300.”
Dally is a crusader for self-employment and believes that there should be no such thing as unemployment in Papua New Guinea.
“I’ve passed on some of my skills to boys on the street and they are making their own money,” he says.
“There are a lot of ways for unemployed people to make money, rather than resorting to crime.
“I think people are just too lazy.
“A lot of people are also too proud to get into such small activities.
“For example, I have brought in some young boys, but they feel embarrassed standing out on the streets selling flower pots.
“Some of my ex schoolmates (from university and Sogeri) see me and they wonder what I’m doing out there, selling flower pots, but I don’t feel embarrassed.
“The problem with Papua New Guinea is that people don’t want to work hard.
“They just want to sit back and wait for handouts.”
Dally does get the occasional building job; however, he plans to stay on in the flower pot-making business.
At the beginning of this year, he registered a business name, to run his own company.
Posted by Malum Nalu at 7/22/2008 11:53:00 AM

Email ThisBlogThis!Share to TwitterShare to FacebookShare to Pinterest
Labels: making use of old tyres