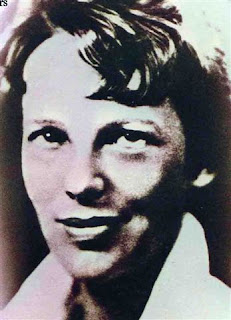 Captions: 1. Date with destiny...Amelia Earhart and her Lockheed Electra at Lae, Morobe province, in July 1937 before her flight into oblivion. 2. Amelia Earhart...put Lae on the world map with her disappearance.
The mystery – that of the disappearance of Earhart and her navigator Fred Noonan – intimately involves Papua New Guinea as Lae was her last port of call before she disappeared somewhere over the vast Pacific Ocean.
Amelia Earhart, darling of American aviation, went missing in July 1937, after leaving Lae for the longest stretch of her around-the-world flight.
The mystery and a long fruitless search – costing many millions of US dollars - had begun.
Today, 71 years after her final takeoff from Lae, the mystery is still to be solved.
Old Lae residents used to recall entertaining the couple in the Hotel Cecil the night before their departure, and then seeing them off the next morning.
Their Lockheed Electra was so overloaded with its eight tonnes of fuel that it was still barely clearing the waves as it disappeared from sight, flying east along the Huon Gulf coast on its way to Howland Island, 4600km to the north.
Today, a plaque to her memory stands at the Amelia Earhart Park, opposite the famous old Lae airport.