The National Alliance party, which had\s led coalition governments for the past nine years, is being dismantled, The National reports. 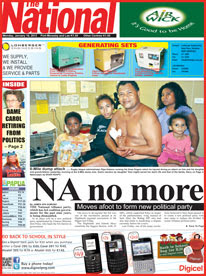 In its place will be a new political party spearheaded by Finance Minister Don Polye, who leads the NA faction in government.
The move to deregister the NA was one of the resolutions passed at the Highlands regional convention in Mt Hagen last Friday.
The Highlands and Islands blocs constitute the biggest faction, with 24 MPs, which supported Polye as leader of the parliamentary wing instead of Sam Abal, the Wabag MP, who had also laid claim to leadership, a dispute currently before the courts.
Last Friday, one of the many resolutions believed to have been passed was to create a new political party with a new name to replace the divided National Alliance party.
The Highlands bloc came up with possible names of the new party which Polye said would be discussed as a matter of formality at the national convention on Jan 22-24 in Port Moresby.
He told a media conference he would deregister NA as soon as the new party, which he had already formed, was in place and "the old one will be kicked out".
Polye invited the NA faction led by founder Sir Michael Somare to join his new party.
He added that he was prepared to go to court to defend his action.
The Highlands bloc meeting was attended by party executives in the seven Highlands provinces.
Among those present were Western Highlands Governor Tom Olga, Correctional Service Minister and Kainantu MP Silon Besseo, Finance and Treasury vice-minister Yawa Silupa, Lands Minister and Guminea MP Lucas Dekena and North Wahgi MP Benjamin Mul.
Highlands deputy leader James Kond said they had invited 13 NA members from the Highlands to attend.
Polye said other MPs like Philip Kikala and Speaker Jeffrey Nape did not make it because of their committments and sent their apologies.
He thanked Olga and Mul and welcomed them back into the group.
Polye said their goal was to retain their 24 parliamentary seats with him and select the best candidates to contest other seats under the new party.