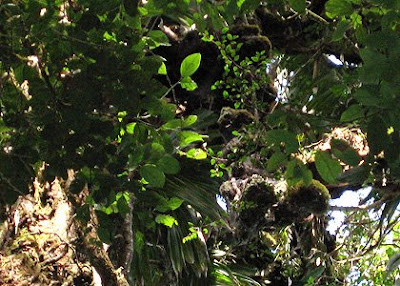 An image of what was thought to be a moss-covered skeleton. Photo: Lisa Fabre
An Australian trekking party's hopes of having found remains of a World War II airman hanging from a tree on the Kokoda Track have been dashed - in fact they discovered a moss-covered branch, The Age newspaper reports.
Australian Defence Force staff from the Australian High Commission in Port Moresby yesterday reached the isolated site in Papua New Guinea to check on the sighting, but found no human remains.
"While the location near Kagi is below a flight path that was commonly used by allied aircraft during WWII sorties, the find has been confirmed by ADF staff as a moss-covered branch," Defence said in a statement last night.
"It appears the branch has broken off the main tree and fallen across some vines which, from the ground, could have been confused with the body of an airman."
The find last month - by a Victorian police officer who was photographing flowers - had sparked hope of closure for a family somewhere in Australia, Japan or the United States.
Guide David Collins, from the Australian company No Roads Expeditions, was leading a trek when the suspected human remains were discovered.
"We had a few police officers on the 19-man trek. One was taking photos with a large lens of the trees and flowers," he said last week.
"He then discovered what looks like the remains of a body.
"I couldn't make it out at first. It wasn't until the wind blew that you could really see it is in a harness. There are goggles and it appears to be caught up in cables, so presumably it is an airman."
Mr Collins said the supposed remains were found in the jungle canopy at the top of the Owen Stanley Range, almost halfway along the 96km track.
AAP
Posted by Malum Nalu at 9/05/2008 09:42:00 AM