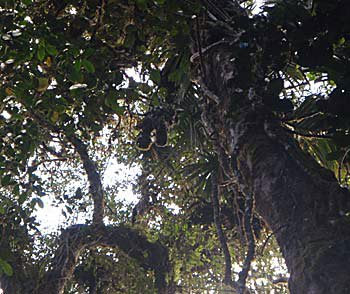 The tree where what is believed to be the body of a WWII pilot has been found on the Kokoda Track in papua New Guinea.

THE skeleton of a World War II pilot is thought to have been discovered hanging in a tree on the Kokoda Track in Papua New Guinea, the Herald Sun reports.

A group of hikers lead by Melbourne man David Collins, of No Roads Expeditions, made the astonishing find on Thursday August 21.

"We had just left Templeton’s Crossing and had walked up over the top of Mt Bellamy and were coming back down to the next camp ground when some of the hikers stopped to take photos of the natural canopy above the trail.

Mr Collins said the body was covered in moss and almost impossible to distinguish initially.

"I couldn’t make it out at first. It was quite high up, about 12 to 15 metres. Then the wind blew again and I saw it move.

"It appears to be sitting in an aluminium harness and hanging from a cable, which leads us to believe it could be an airman.’’

Mr Collins, who was walking the historic track for the seventh time when the discovery was made, said it could be a significant find.

"If it is a body, then it’s a very significant find. There will be a family somewhere who had a family member missing in action who might be able to put that person to rest.’’

"There were a lot of missing soldiers in that area. You know you are walking past the graves of many people.’’