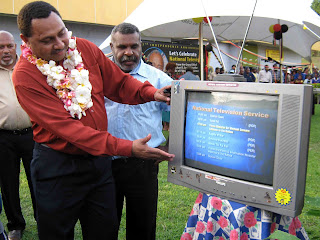 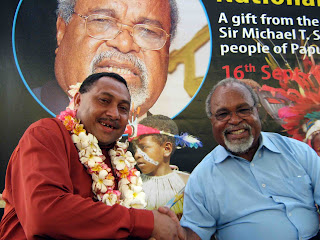 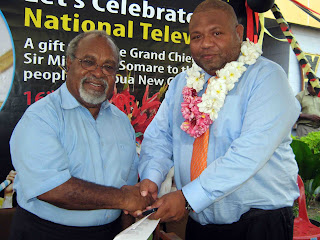 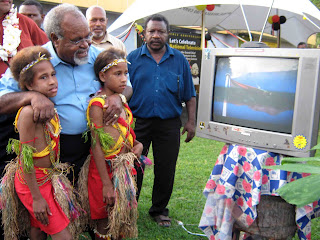 Note: This story was also published in The National, Papua New Guinea's leading daily newspaper and my employer, on Friday September 19

September 16, 1975, was indeed a momentous occasion for Papua New Guinea as we gained our independence from Australia.

And September 16, 2008, was likewise a significant date on PNG’s calendar as the country finally received its long-overdue television station.

The common denominator in both 1975 and 2008 was that Sir Michael Somare was there was prime minister.

I was also there in 1975 as an eight-year-old child in Goroka, and now, as a 41-year-old widower and father of four young children in Port Moresby.

“The dawn of a new era”…”proud moment for PNG”…”the world will now know PNG” were some of the phrases used on Tuesday this week to describe the launch of the State-owned television station in Wewak, East Sepik province.

The National Television Service (NTS) was switched on at the Port Moresby studio at exactly 6pm after the ceremonial launch in Wewak by Sir Michael.

Large screens were set up in Goroka, Mount Hagen, Rabaul and Port Moresby to watch the new service of mostly pre-recorded programmes.

As the TV screens assembled outside the NBC Wewak studios showed the live transmission in front of Sir Michael and invited guests, the Prime Minister hugged 10-year-old Manus twins, Debbie and Barbie Sipasan, and watched the screen with a big smile.

In Port Moresby, as I watched the transmission, I was likewise overwhelmed with emotion like my journalism classmate Joe and tears rolled down my eyes as my children asked me why I was crying.

It had taken so long, and at last, Sir Michael had lived up to his words by delivering an independence gift of a national television station on September 16, 2008.

The night started off with Yumi Yet, a nostalgic look at footage from September 16, 1975, moments forever etched in time.

This was followed by an address to the nation by Sir Michael on the setting up of NTS.

Then came Angels of War, a balanced view of WW11 from both the Allied and Japanese perspectives, with snippets from Papua New Guinea’ fuzzy wuzzy angels’, members of the Pacific Islands Battalion, as well as heroes like East Sepik’s Yauwiga with his one arm and blue eye, courtesy of an Australian donour.

Young Goroka-based journalist, Llane Munau, got the show running by introducing Chris Owen’s Betelnut Bisnis, a documentary on the trials and tribulations of his security guard, a wannabe buai tycoon.

The night ended off with Tin Pis Ran, starring my old Lae buddy and ex Aiyura National High School schoolmate, Oscar Wanu, a skit on the adventures of an old man, his offsider, his daughter and his happy-go-lucky PMV truck.

Communications Minister Patrick Tammur pulled down the curtain on a fine night of entertainment by committing the station to a lot of local content.

I asked myself, after watching all the PNG content, why we don’t have a viable film industry in the country after all these years.

EMTV also had the opportunity to promote local content for more than 20 years but failed miserably,

These days, with the advent of television, video, VCDs and the Internet, the movie projector has become as antiquated as the time-honoured typewriter.

The 70’s that I grew up in was an epoch of PNG classics like Wokabaut Bilong Tonten, Marabe, and the later Tukana: Husat I Asua, to name but a few.

There were also local productions on the likes of agriculture, health, family planning and small business – seemingly destined for greatness.

The missionary zeal of the now-defunct Office of Information needs to be rekindled.

In those days, officers carried projectors to rural areas and showed development films, meaning that people actually participated in development.

When the government abolished the OI, PNG started having problems because information on development wasn’t getting out to the people, particularly the vast majority in the rural areas,

Sadly, as is the case with most things in PNG since September 16, 1975, things have fallen along the wayside.

In 2000, I wrote a series of articles for The National out of Goroka for PNG’s silver jubilee, one of which was an interview with local filmmaker Rodney Sinaune: “If the government seriously looks at the importance of this industry, it will help a lot in the development process.

“People will be educated if we use the mass media; they will become equal partners in development.

“There have been many productions made about PNG (by expatriates), but we are not supporting a local industry.

“People from overseas are gaining mileage out of us.

“The need is there, the demand is there, but the government needs to give proper direction.

“The government should also look at setting up another TV station, as there’s a lot of material being produced, but no medium over which to broadcast.

“It should, perhaps, also look at the creation of a National Film Commission.

“If the National Executive Council, through an Act of Parliament, creates a National Film Commission, everything will be alright.

“The film industry will also employ a lot of people.

“The government, for far too long, has overlooked the industry.

I know that film makers like Chris Owens, Rodney Sinaune, Leonie Kanawi, Ignatius Talania, Baike Johnston, and many others, will finally breathe a sigh of relief with the setting up of NTS.

It is, perhaps, a case of ‘better late than never’ as Sir Michael has finally seen the plight of the people of this country and set up a TV station, which will also hopefully create a strong local film industry, in the twilight of his career.
Posted by Malum Nalu at 9/19/2008 03:12:00 PM