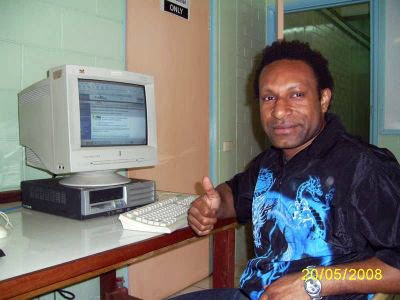 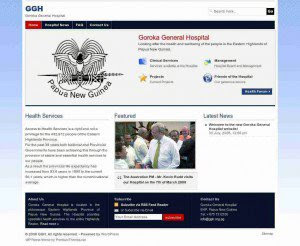 Goroka General Hospital has taken a giant step forward into the information age and e-health revolution by being the first hospital in the country to set up a website.
The website http://www.ggh.org.pg/ was set up recently by the hospital’s volunteer IT manager Robert Schilt.
“Goroka General Hospital is committed to embracing Information Technology (IT) as part of its overall strategic direction, which is to enhance and improve the delivery of effective Health Services to people of the Eastern Highlands Province of Papua New Guinea,” said a proud hospital CEO Dr Joseph Apa.
In addition to the commissioning of this website, the hospital has already implemented several other IT-related projects over the past 18 months under Schilt, which include:
Establishment up of a Business Resource Center (BRC) that has a state-of-the art IT training facility with 12 PC’s, where regular computer training is conducted and offered to hospital staff.
Deployment of approximately 50 PC’s and laptops to various hospital departments.
Availability of Internet services such as the World Wide Web and email to staff through the Business Resources Center including access to the HINARI Online Subscription.
Development and programming of several hospital information systems (HIS) including laboratory results application, medical stores application, attendance register and various statistical reporting tools to assist departments with their reporting requirements.
Development of a hospital Intranet which is now almost complete. The Intranet is an online resource that will only be made available to hospital staff; and will make information such as staff telephone directories, standard forms and other internal resources easily accessible. It is envisaged that all future hospital information systems and applications will be deployed through the hospital's Intranet.

“We are also very excited to announce that all of the software and systems deployed at the hospital have been done using an Open Source Software (OSS) framework,” Dr Apa said.
“This approach has saved the hospital the high costs associated with the licensing of proprietary software systems such as Microsoft.
“This website will continue to evolve and we already have planned to launch the following web services in the near future:

An online forum for PNG doctors to discuss and share relevant clinical information.
A member’s section which will give registered users access to additional information.
Hospital news items.
Links to useful health resources.
Other features.

“So stay tuned and in the meantime, if you need to contact the Hospital, you may do so by sending an email to info@ggh.org.pg.”
Schilt said both Internet access and access to the HINARI service was a first for hospital staff in Papua New Guinea.
“The Health InterNetwork Access to Research Initiative (HINARI) provides free or very low cost online access to the major journals in medical and related social sciences to local, not-for-profit institutions in developing countries,” he explained.
“HINARI was launched in January 2002, with some 1500 journals from six major publishers: Blackwell, Elsevier Science, the Harcourt Worldwide STM Group, Wolters Kluwer International Health & Science, Springer Verlag and John Wiley, following the principles in a Statement of Intent signed in July 2001.
“Twenty-two additional publishers joined in May 2002, bringing the total number of journals to over 2000.
“Since that time, the numbers of participating publishers and of journals and other full-text resources has grown continuously.
“Today more than 70 publishers are offering their content in HINARI and others will soon be joining the programme.
“An evaluation is in progress which will determine the long term future of HINARI.”
For those familiar with website design the original site was developed with an Open Source application called Joomla.
This new and revamped website has been put together for Goroka General Hospital using Wordpress.
“Some folks would like to think of Wordpress as solely a platform for writing blogs but as I’m learning it is far more powerful than that,” Schilt said.
“Due to its structure, available functionality and Content Management System (CMS) abilities it can easily be used to create fully fledged websites.
“I will shortly add Forum functionality using an add-on product called ‘bbPress’.
“The Forum will be made available to Health professionals with access to the Internet in Papua New Guinea to share ideas and resources and will naturally be called the ‘PNG Health Forum’.
“The new website is still lacking a lot of content but hopefully, with time and quality contributions from hospital management and staff, we will see it become a valuable online resource for the health professionals in the Highlands region and also the rest of PNG.”
Access to health services is a right and not a privilege for the 432,972 people of the Eastern Highlands province.
For the past 38 years, both national and provincial governments have been achieving this through the provision of stable and essential health services to our people.
As a result, the provincial life expectancy has increased from 53.6 years in 1990 to the current 56.1 years, which is higher than the current national average.
Goroka General Hospital is located in the picturesque Eastern Highlands Province of Papua New Guinea.
The hospital provides specialist health services to the entire Highlands Region
The website http://www.ggh.org.pg/ is a giant step for the health system in Papua New Guinea.
Posted by Malum Nalu at 9/18/2008 07:47:00 AM

Email ThisBlogThis!Share to TwitterShare to FacebookShare to Pinterest
Labels: Goroka hospital goes online in a first for Papua New Guinea