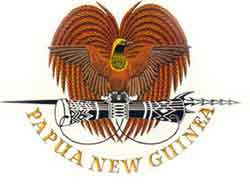 The National Emblem or Crest adorns all official documents, stationery and even buildings.

It features a Raggiana Bird of Paradise, perhaps the most popular and distinctive bird of paradise known with its plumes in full display.

The Raggiana holds a kundu drum and a ceremonial spear.

The words are often inscribed in a shallow arc immediately below the emblem.

The emblem is described in the National Identity Ordinance of 1971.

The emblem is representative of all parts of the country since the symbols on it are well known throughout all regions of .

The emblem was designed under the direction of Hal Halmann, who was a senior designer for the Office of Information during the years leading to .

Mr Holman’s more recent works include the busts of Sir Michael Somare outside the entrance to Parliament and the metal sculpture of the Raggiana on in the centre of the Holiday Inn Roundabout.