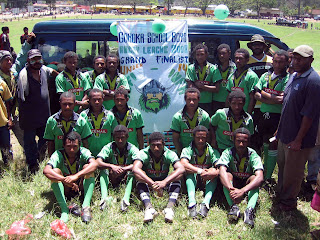 Last Saturday afternoon, Goroka had fine weather and a cool wind blew through town as we awaited the grand final games of the Goroka (Eastern Highlands) school boy’s rugby league,

Many schools around Goroka district, Daulo and Ungai-Bena took part in this year’s competition with total 21 teams from community, primary, high, secondary and international schools fielding teams in Under 14, Under 16 and Under 18.

Our team Iufi-iufa Raiders Under 14 made it into this year’s grand final.

Last year we won the Under 16 grand final but this year lost in the semi-final last week.

Last year Under 14 drew in the grand final.

The GIS boys played very well in the first half and scored a centre try to lead 4-0 at halftime.

At the half time the board chair man of the school and the former team manager of the Goroka Lahanis, Himony Lapiso, told the boys: "Enjoy your game and play like this is your home ground.”

Our boys played beautifully in the second half, but the National Park field is not level, so it was difficult to score.

Around the 35-minute mark we scored a successfully-converted centre try to win 6-4.

Team coach Eddie ‘Three Wheel’ Tom is a disabled person who lost his right arm in a traffic accident, however, always says, “disability is my ability”.

Selected boys will go on and play in Lae and Kimbe.

Hope they can show good ‘Nokondi spirit’ there.

I am an assistant team manager of the Iufi-Iufa school boys amd fully enjoy the games in ‘Kol Peles Goroka.

I would like to thank the organising team of the league.

I hope the competition continues for the long haul and provides future rugby league players to the nation.