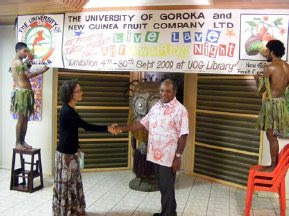 Art in Papua New Guinea has entered a new dimension with the launching of the Live Lave Art Awards.
The competition was formally launched on campus at the University of Goroka (UOG) last Wednesday.
In a first for UOG, a total prize pool of over K20, 000 will be offered for winning entries in the Live Lave Art Awards competition for 2009.
The competition will be the highest-ever paying of prizes for art awards in Papua New Guinea.
The Live Lave Art Awards is jointly sponsored by the New Guinea Fruit Company and UOG, and is a competition for artworks in three different media: painting, printmaking and innovative craft sculptural form.
First prize for the painting category is a record K10, 000, while second prize is K5, 000.
New Guinea Fruit Company, a Goroka-based business specialising in locally-made fruit drinks and other fruit products, moved to support the arts at UOG through donating K36, 500 to support the Live Lave Art Awards competition.
Acting vice chancellor of the UOG, Associate Prof Michael Mel described the evening as “a special occasion for many of us…as many things make UOG unique from its other sister universities and the development of culture is one of these factors”.
Prof Mel said the art awards had become an annual event at UOG after its initial conception during the Goroka Coffee Festival in 2008.
He said that this year’s art awards were a “private and public collaboration between New Guinea Fruit Company and UOG to support and collect culture in its various artistic forms”.
New Guinea Fruit Company representative Ms Sally Watson, who attended the evening, said sponsoring art had been an idea of the company’s for the last few years and of great interest to them.
She said it was a pleasure to be involved as it “is important to preserve art for the future” especially for our children’s sake.
The programme for the evening included guests touring an exhibition of entries from last year’s competition acquired by the UOG; witnessing the signing of a memorandum of understanding between UOG and New Guinea Fruit Company and the official launching of the Live Lave Art Awards by UOG chancellor Peter Baki and Ms Watson representative of New Guinea Fruit Company.
Mr Baki said the loss of culture equaled the loss of a nation.
“The future is redesigned and rewritten, with UOG’s support for culture, starting tonight,” he said.
The launching saw a good turnout from corporate friends and staff of UOG, including council members, who were happy to support UOG and sample products from New Guinea Fruit Company.
Posted by Malum Nalu at 7/12/2009 04:21:00 PM