Bulolo thanks outgoing US envoy 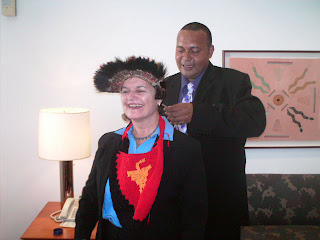 Bulolo MP Sam Basil ties a traditional headdress on outgoing US Ambassador Lesley Rowe
People of Bulolo, Morobe province, on Thursday, July 09, 2009 presented gifts to outgoing US Ambassador to Papua New Guinea Lesley Rowe.
The gifts – bilums, a headdress and a spear – were presented to Ms Rowe by Bulolo MP, Sam Basil, who earlier this year witnessed the swearing in of Barrack Obama as 44th US president at the invitation of the US government.
Ms Rowe told Mr Basil that she was so glad that he had been able to travel to the US and witness the historical transition of power.
“It was a historical time,” she said.
“I’m glad we got you (to travel to the US) when you were young.”
Mr Basil thanked Ms Rowe on behalf of his fellow Buang villagers, people of Bulolo and Papua New Guinea for the last three years she had spent in the country.
Posted by Malum Nalu at 7/10/2009 03:33:00 PM