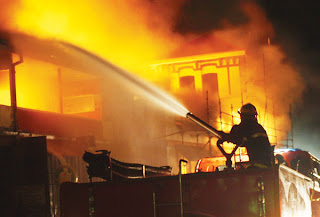 Caption: A firefighter trying to put out the fire on the roof of Tribal Den nightclub. On the right is the tower undergoing renovations by Hornibook PNG – Nationalpic by Henry MorabangA

By PATRICK TALU in The National, ’s No. 1 daily newspaper

The former , a colonial icon in downtown , was gutted by fire last night.

The building was recently purchased by Nasfund.

Eyewitnesses told The National the fire started around 7pm, and by 9pm, the building was burnt to the ground.

The fire service arrived at the scene but could do little. But they managed to prevent the fire from spreading to the Westpac Bank.

The cause of the fire is not known.

An employee of a firm that operated the internet café said he believed the fire started in one of the offices at the top floor.

The firemen responded quickly but could not contain the fire as the building was too wide and the fire had spread from the middle of the building.

The winds, blowing briskly towards , ensured the fire spread quickly.

The firemen tried their best to put out the fire but tackling the inferno from only one side was a lost cause as the fire had already spread all over the building, making it impossible for the fireman to contain it.

As the flames spread towards the Westpac Bank building, which was adjacent, firemen fought hard to prevent the flames from engulfing the bank.

Chief of PNG Fire Service Isaac Silas, who was at the scene, said he could not make any comments yet as it was too early to determine the cause of the fire.

Some opportunists tried to take advantage of the situation to loot shops but police were on guard.

Residents from downtown, who were there to witness the scene, described the building as one of the iconic and oldest buildings from the colonial period.

They said it was built almost the same time as the Papuan Club, which was burnt down in the late 1960s.

In 2007, Nasfund purchased 51% of Burns Philp and purchased the remaining 49% last year. The site comprised 5,191 square metres over six titles.

The fund wanted to redevelop the site for historical reasons. It wanted to ensure that the section would remain preserved because the tower was perhaps the most historical building in the country, dating to the early 1900s.