The call of the Saruwaged 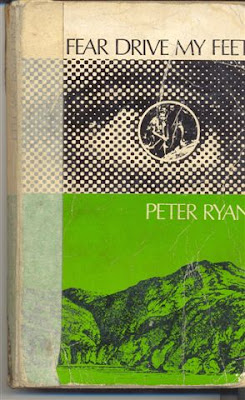 A dog-eared copy of Fear Drive My Feet, which is essential reading for all students of PNG history

The rugged Saruwaged Range of Morobe province came into prominence again last Dec 30 last year when a Cessna 185 crashed there, killing a family of six people, and again highlighting its unforgiving terrain.

Walking the Saruwaged has been a goal of me and my good friend, Michael Kari from Manus province, whose father served with distinction there during the dark days of World War 11 and is the star of Peter Ryan’s best-selling book Fear Drive My Feet.

I have already walked Kokoda and Black Cat Trails, and it has largely been through my efforts, through numerous magazine and Internet articles, that the Black Cat has now become an internationally-recognised tourism icon.

Next up is the Bulldog Trail linking Gulf and Morobe provinces, and of course, the Saruwaged.

Kari and I have been talking about trekking the Saruwaged since 2004; however, our logistics and finances have not yet fallen into place, unless, of course, Morobe leaders and the provincial administration can sponsor an expedition.

The (also Saruwared, Sarawaket or Sarawaget) is a mountain range on the in Morobe province, north-eastern .

The range is dominated by the Saruwaged Massif which is capped by the two peaks of and .

The runs into the to the west and together they form a natural barrier between the Ramu and Markham valleys to the south and to the north.

Streams flowing from its southern flanks feed the .

The Germans, during their years of administration in the late 18th and early 19th centuries, made several exploratory trips into the range.

Early European ascents of Sarawaged Massif include those by the missionary Christian Keyser in 1913 and Charles Lane Poole in 1925.

Ascending to these summits would be likely to depend on finding a way through thick tropical rain forest.

I first became a fan of Fear Drive My Feet – a minor classic of World War 11 - way back in the late 1970s and early 1980s when it became a hit radio play on the National Broadcasting Commission.

Fear Drive My Feet, written by Peter Ryan and first published in 1959 by Angus & Robertson in , describes the factual adventures of one man in the struggles of 1942 and 1943 in the savage country of the area of Morobe province (then district).

As an Australian soldier of 18, Ryan, who is still alive, was sent out alone and untrained, to conduct intelligence patrols for months on end, deep in the jungles of Japanese-occupied .

Without heroics, his book describes the hardships and dangers of such a life, though they did not blind him to the stupendous beauty of the country and the nobility of its native peoples.

He joined the Victorian Crown Law Department but left in 1941 at the age of 18 to enlist in the Army.

For 18 months, he worked on special intelligence work in PNG behind Japanese lines, winning the Military Medal in 1943 and being mentioned in dispatches.

Fear Drive My Feet, rarely out of print over the last 40 years, is a classic story of the darkest days of WW11, when itself stood in deadly danger.

James Kari, who is the son of Sergeant Major Kari – one of the heroes of Fear Drive My Feet – wants the not to be forgotten and must become recognised like the Kokoda Trail, Black Cat Trail and Bulldog Trail.

He also wants an expedition undertaken to recreate that done by his father and Ryan over 60 years ago.

Fear Drive My Feet is a captivating factual narrative of the author’s and Kari’s experiences between Wau, the vast and the towering during the dark days of WW11.

Other places like Lae, Salamaua, and the infamous Black Cat, Bulldog and Kokoda Trails come into mention in this book that all ardent students of PNG history must read.

Ryan was only 18, Kari 20, when they were part of the 2/5th Australian Commando Company in patrol and observation work behind Japanese lines in 1942.

The Manusian was a giant of a man – standing over six feet tall – and his exploits are well documented in the annals of Australian military history, including the killing of several Japanese.

As Ryan describes him: “He was as black as coal, six feet tall and so broad that he filled the whole entrance…his skin was smooth, glossy and hairless, and you could see the magnificent muscles that rippled underneath it.”

Apart from Kari, many other Papua New Guineans are mentioned in the book, and it is my fervent hope that the younger generation of those mentioned have read or will take time to read this book to understand the misery of war.

They include Watute and Dinkila, who made an excellent deduction from the way the Japanese were moving, that they were preparing to evacuate Lae.

Another notable character is Buka, whose real name was Ure but because he came from somewhere in Bouganville he was called Buka, and who went stampeding, stark naked, around a village threatening to shoot all the men in a case of temporary memory loss.

Dinkila comes into the story after Kari as a cook, but eventually takes over Ryan’s life, as he decided what his boss should wear and eat.

One day, the Japanese made an air raid and before he could jump into the safety of the trenches, Dinkila fell into a toilet pit.

His body stank terribly that Ryan asked if he had soiled himself, however, Dinkila replied: “Master, me hearim bomb ‘e come, now we fall down long haus pekpek.”

There is constant mention of Singin, tultul of Wampangan village, who constantly helped Ryan’s group.

Legendary patrol officers Leigh Vial and Ian Downs, who made significant contributions during peacetime and war, are well mentioned.

It is a work of non – fiction but will captivate you just like any of the best novels.

The narrative is captivatingly built up and it culminates with the dramatic escape in the final chapters.