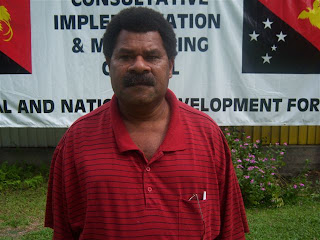 Caption: Mr Uhena pictured outside the Comfort Inn during the CIMC meeting.-Picture by SOLDIER BURUKA

There is potential for rubber in the oil palm-dominated Oro province but more effort is needed to improve agricultural delivery services including transportation and marketing.

The call was made by a rubber grower, Paulinias Uhena, who says many people are interested in rubber development but are critical of the lack of basic infrastructure services as well as inadequate extension and technical support from the relevant government agencies.

The main constraints faced by farmers are the lack of transportation to transport the rubber cup lumps to designated markets, access to basic infrastructure such as roads and bridges, extension advice, credit and finance, rubber seedlings and the appropriate tools for tapping.

There is also a need to rehabilitate the rubber trees as well as to go into further expansion.

“We need assistance with transporting of rubber produce from the rubber plantations to the main road, feeder roads to be built and upgraded,” Mr Uhena said.

“We need rubber tapping equipment, and we need seedlings for planting.”

“Our biggest obstacle to rubber development and most agricultural productivity is the lack of roads and bridges and the poor conditions of the feeder roads.

“This has been the major concern before, during and after the cyclone disaster that affected the province in 2007.”

He said desperate farmers had to pay people to carry their bags of cup lumps to the nearest road to await transport.

He said what the people needed was cheap transport such as tricycles.

Mr Uhena said the Ioma area not only produced rubber but also cocoa, coffee and vanilla and there was enormous potential for forestry development or agro forestry.

He said there were several options on agricultural productivity for the people to choose, however, this would be made easier with better access to good roads and bridges, market, extension and other essential services.

He said rubber plantations that were established in the early 1970s with provincial government assistance were now in production and this gave the people the opportunity to tap the trees and earn reasonable income.

He said there were over 34,000 matured rubber trees which were in total production.

A local market for rubber cup lump has been established in Popondetta at 90t/kg which is attractive for growers.

Mr Uhena, who works in the provincial administration, is the chairman of the Aeka rubber project in the Ioma sub district of Sohe district, which has over 200 farmers. Another 200 farmers exist in other nearby districts, which mean that the rubber production can be doubled in the province.

The growers and their families, despite the difficulties they encounter, are happy that they are able to earn some income to sustain their livelihood.

Mr Uhena said he had raised his concerns with Mr Dutton who had assured him that he would approach the PNG Sustainable Development Program for possible assistance.

Mr Uhena said he also appealed to the Department of Agriculture and Livestock to donate a big truck and a tractor and provide the appropriate tapping equipment including cups and knives.