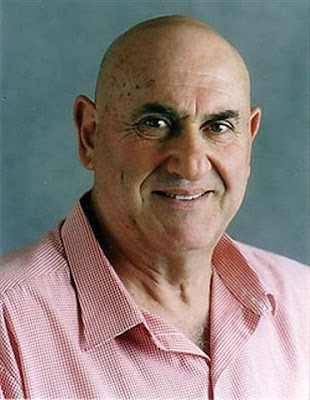 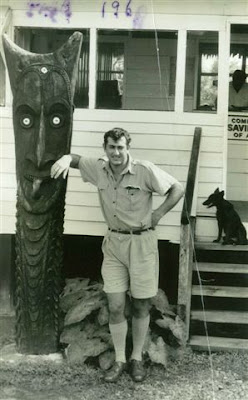 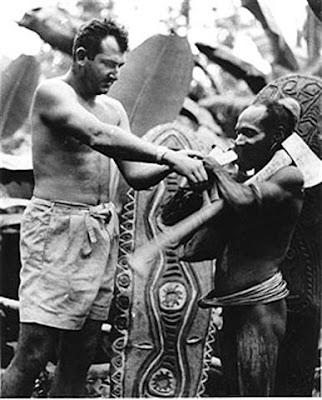 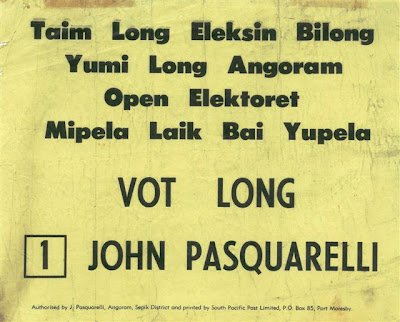 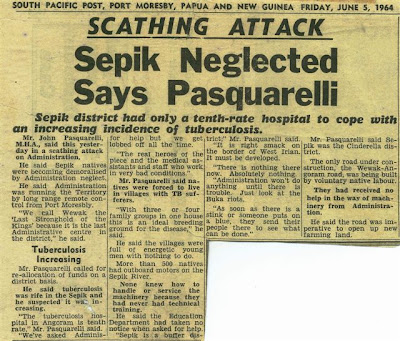 Newspaper cutting from 1964, in which John Pasquarelli fires a broadside at the administration, for neglecting the high incidence of tuberculosis in the district 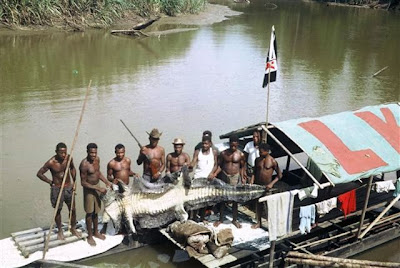 A John Pasquarelli crocodile-hunting expedition along the in the 1960s 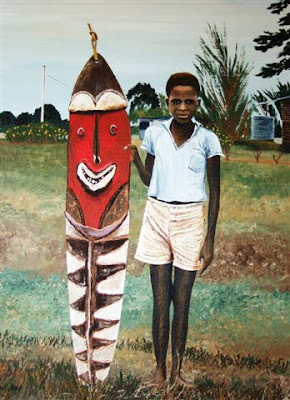 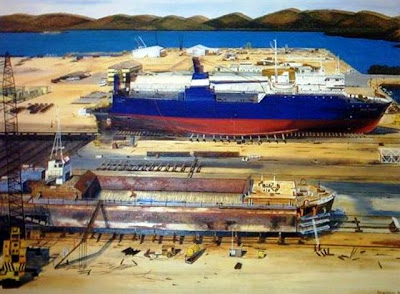 John Pasquarelli painting of outside 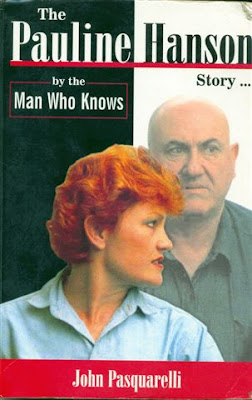 
Since the end of last year, I have been quietly corresponding with legendary river crocodile hunter and Member of the First Papua and New Guinea House of Assembly in 1964, John Pasquarelli.

That has been since he sent me an email asking for regular PNG political updates as well as my political allegiances, and we have since become good friends, although we have never met each other personally.

I have asked Pasquarelli to write an article about him, given his role in the history of PNG politics, and he said to take my time as there was no rush.

Pasquarelli was on the political scene before Michael Somare, beat Somare’s father Ludwig Somare Sana for the Angoram Open seat in 1964 and was around before current Angoram MP Arthur Somare was even born.

He has sent me old photographs and newspaper cuttings of his days as a crocodile hunter and as PNG House of Assembly.

One thing I discovered about Pasquarelli, 72, who has often been called a “racist” and was political advisor to Pauline Hanson before she sacked him in 1996 and founded the infamous One Nation Party in , is that he has a strong and controversial view on anything to do with politics in PNG.

For instance, when his longtime PNG mate, Morobe bush pilot Richard Leahy, crashed last December in the Saruwaged Ranges with six people being killed, Morobe Governor Luther Wenge threatened to have Leahy charged with manslaughter and deported from the country.

“If I am a racist,” Pasquarelli told me in typical dry Australian style, “this Wenge is ‘king of the castle’.”

His book, The Pauline Hanson Story by the Man Who Knows, of which Pasquarelli has sent me a copy, is a fascinating look into the fish-and-chip shop lady who was elected as Federal Member for Oxley and touched a vital nerve among Australian voters.

“Regarding One Nation, Pauline Hanson sacked me before she formed One Nation,” he says.

“I told her to remain an independent and not to form a party – see my book.”

His views about PNG are forthright and hard-hitting; although it may be 46 years since the then 26-year-old Pasquarelli first entered PNG politics and carved a niche for himself.

“It was obvious that PNG law and order was starting to come apart in the early years after independence and this was confirmed to me when I returned to PNG in 1990,” he tells me frankly.

“PNG has huge problems with lack of proper law and order, AIDS and massive corruption at all levels of government.

“ is gaining great influence in PNG, , Solomons and you know the story about selling your soul to the Devil

John Pasquarelli has been around and he is remembered wherever he's been, be it the far-flung reaches of the in PNG or pubs stretching from to Mooloolaba to .

In his wake are a string of strained relationships.

People say he is abrasive and domineering.

They remember language and attitudes that are racist.

But most of all, they remember that he's big.

The temptation is to look at his size and hard-edged Kojak appearance, and dismiss him as an archetypal right-wing thug.

Tempting, but wrong, because the 72-year-old Pasquarelli also is articulate and shrewd.

He’s a gifted artist and writer.

He was a member of the first PNG House of Assembly when he was 26.

He understands politics and the media.

Pasquarelli's grandparents migrated from and settled in at the turn of the century.

His father, Joe, a doctor, brought his wife, Marie, and two young sons to Colac in the early 1950s and worked as a partner in a local practice and later in .

Pasquarelli says his father went to university with celebrated surgeon Edward "Weary'' Dunlop and assisted him in surgery.

During the war, while Dunlop was a prisoner, Joe Pasquarelli worked in a field hospital in PNG.

Pasquarelli says that Dunlop, a POW surgeon, referred to his father as a great doctor in a book he inscribed.

He gave the book to his nephew.

John Pasquarelli and his younger brother, Leon, attended high school in Colac and John apparently was expelled in fifth form.

He finished his schooling in Ballarat.

In the late 1950s, Pasquarelli began a law degree at .

“My medico father had served in during WW11 and he suggested I go to PNG.

“I was recruited as a cadet patrol officer, studying at Australian School of Public Administration (ASOPA) at Mosman, then to Moresby in1960, where I was posted to Angoram on the Sepik

“I didn’t last long in the administration and resigned after crossing swords with a German Catholic priest who was stationed at Marienberg, downstream from Angoram.

“Young was a marine engineer who had left Samarai for WW1 when he was only 17.

“He survived and ended up at Angoram.

“He was a native labour recruiter and trader, who went bush during WW11 with his loyal Sepiks and ended up in interpreting aerial photos.

“I started shooting on the Ramu and then the upper reaches of the .

“I set up trading posts at Ambunti, and then Amboin.

“Initially I was shooting myself and had some good bois I had trained and who were licensed to use shotguns.

“We used rifled slugs, and my team also used spears and later we used baited hooks in the lagoons – flying fox as bait.

“As things developed I then started buying skins from villagers.

“I supplied torches for spotlighting and salt to preserve the skins.

“As well I looked after village outboard motors and supplied petrol as well.

“Skins were sold to buyers from Europe and .

“I was bitten through the left hand by a six foot croc and I still have the scars.”

Pasquarelli tells me that he entered PNG politics because of what was happening in during the 1960s.

“I was in politics at and and took my interest to PNG,” he remembers.

“I could see what was happening in where black despots took over after colonialism.

“I stood for the Angoram Open Electorate and won in 1964.

“Michael Somare’s father was one of my opponents.

“I decided against running again as I was sure that PNG was heading down the wrong track.

“I endorsed Peter Johnson who still lives in Wewak and he was elected 1968-1972.

“I left PNG in 1979 and lived for a while in the Phillipines.

“I returned to in the early 1980s and worked for a while as an insurance investigator, renovated the odd house

“In 1990, whilst at Kikori, I suffered my first attack of Meniere’s disease and this disrupted my life until well after 1996.”

Pasquarelli tells me that his best memories of PNG were of the times in the 1960s and early 1970s before independence.

“I also became very interested in primitive art and artefacts I collected are safely stored and on display at Basel Museum, French National Museum, Metropolitan Museum of Art in New York, etc,” he remembers.

“I am supposed to be an expert on Oceanic art.

“As an MP I supported the people in respect of agricultural development and I had the Haus Tambaran at Kanganaman declared National Cultural Property."