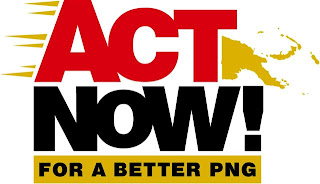 Effrey Dademo, programme manager, says: “By forcing the Attorney-General to resign, the Prime Minister is sending a very negative signal to other Ministers and to the people of PNG."

Dr Marat was forced to resign last Tuesday after he spoke out against the government's proposed changes to the powers of the Ombudsman Commission; questioned the benefits that would flow from the LNG project; and, the wisdom of allowing the Ramu and Solwara 1 mines to dump waste in the sea.

“In speaking out on these issues, the Attorney General was voicing the opinions and fears of the people of PNG," Ms Dademo says.

“The Prime Minister should listen to what the people are saying and respond to their concerns rather than shooting the messenger. That sends totally the wrong message. It says the PM does not care about the people”

“Act Now! would like to remind the PM and all MPs that Parliament exists to represent the people, not to force grand ideas on us that may make our leaders and foreign companies richer but will not benefit the people.”