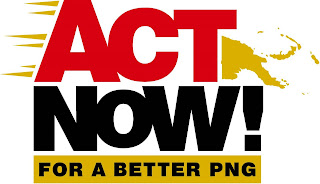 : Ninety-nine percent of people who voted in an on-line poll think the government is not doing enough to tackle corruption.

The poll was conducted by the public interest group ACT NOW!

Effrey Dademo, Program Manager, says: “The message to the Prime Minister and the government is clear. The people want to see much more action on corruption. That has to include prosecuting white collar criminals in the public service and those they conspire with”.

ACT NOW! says corruption is the biggest single issue facing PNG as it takes vital funds away from the health sector, education and infrastructure maintenance.

“Why are our hospitals crumbling? Why do our kids go to schools with no books in the library? Why are our roads impassable? It is because our government is failing to stop corruption and the theft of public money”, Ms Dademo says.

ACT NOW! says the people of PNG have a right to know what the government is doing to give effect to the recommendations of various Commissions of Inquiry, including the very recent finance inquiry. Also, what steps have been taken to investigate allegations against government Ministers who have been linked to bank robberies committed by William Kapris?

“We hope the Prime Minister will listen to what the people are saying and take some immediate action.”